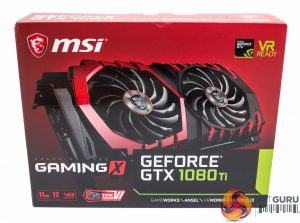 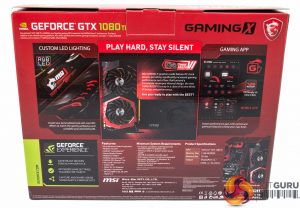 Packaging is clear and succinctly communicates the unique selling points of the product. The style and design of the packaging is very similar across the entire Gaming X range. 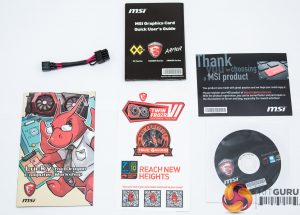 The accessory bundle is typical of a graphics card – some documentation, stickers, a driver/utility DVD and a PCIe power adapter. 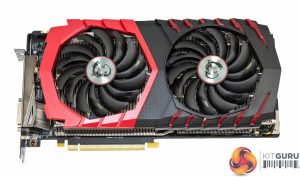 At first glance the MSI GTX 1080 Ti Gaming X is similar to the MSI GTX 1080 Gaming X (Plus) KitGuru tested recently. However, upon closer inspection it varies slightly as it's heavier, weighing in at 1.25kg, and wider, but measures in at the same length of 28cm.

The overall design is simple, appealing and built to a high level of quality. The only criticisms the GTX 1080 Ti Gaming X is open is the fact it is beyond a dual slot form factor, approximately 2.5 slots which de-facto makes it triple slot, and the fact it is “hard-wired” to be red and black. To clarify further there are no options to customise those red accents on the graphics card cooler so it really is red unless the buyer undertakes some DIY modifications off their own back and at risk of voiding the warranty.

Both fans fitted to the GTX 1080 Ti Gaming X are 100mm double ball bearing fans using the MSI Torx 2.0 design. There is a standard semi-passive operational mode below a temperature threshold of 60 degrees Celsius which means that generally under light loads and idle the fans will not operate.

Power is drawn in through two 8 pin PCIe connections. 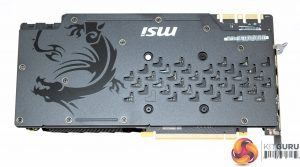 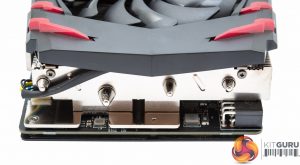 At the end of the graphics card it is possible to get see that large 2.5-slot profile in all its glory. At the I/O end MSI provisions dual-link DVI-D, two HDMI 2.0b and two DisplayPort 1.4. 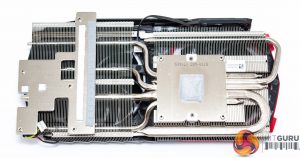 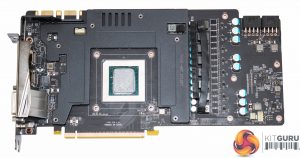 The cooler used by MSI has five heat pipes in total, four 6mm and one 8mm. These snake in various directions through the dense heatsink array but all five originate from the GPU contact plate. MSI has included an additional nickel plated contact plate to draw heat away from the VRMs, aided by some thermal pads and linked in to the heat pipe network.

The PCB uses an 8 phase design with 4 MOSFETs per phase and there are additional metal plates to provide cooling and structural rigidity to PCB components. Like on most of its high-end graphics cards MSI uses Super Ferrite Chokes (SFCs), Hi-C capacitors and Japanese solid capacitors throughout.