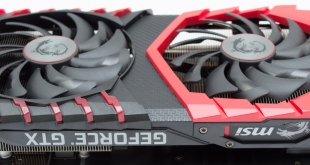 The GPU market is in a precarious state due to the impact of cryptocurrency mining on supply and demand. Fortunately for gamers, Nvidia's GTX 1080 Ti seems to have come through unscathed – prices are close to normal and stock is still widely available. KitGuru has already assessed a number of impressive GTX 1080 Ti offerings from the likes of ASUS, Gigabyte, MSI and Palit and today we are analysing the MSI Gaming X variant. 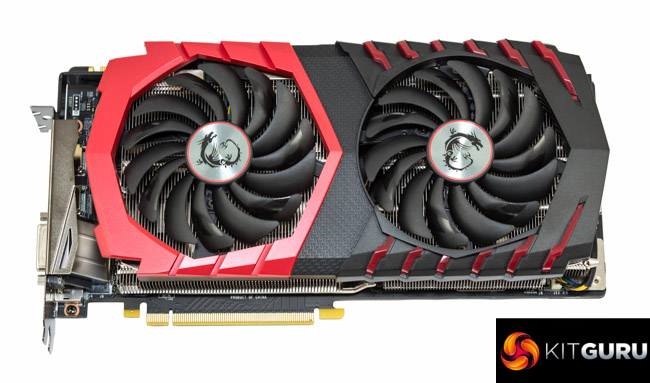 The Gaming X series from MSI is frequently a hot seller on etailer websites and a highly-regarded graphics cards brand across the PC industry, after testing the MSI GTX 1080 Gaming X Plus it is easy to see why. Nvidia's GTX 1080 Ti remains the best high-end option for PC Gamers with deep pockets and third party options like this one from MSI offer the best range of cooling, features and noise, or lack of it.

The formula with MSI's GTX 1080 Ti Gaming X isn't anything unusual. MSI has taken Nvidia's GTX 1080 Ti GPU, overclocked it to 1,658MHz on the core (up from 1,582MHz) and assembled it onto a reworked PCB design. MSI overhauled the cooling with its TwinFrozr cooler which is almost-but-not-quite 2 slots in size. Dimensions have expanded over the MSI GTX 1080 Gaming X in order to account for the increased heat output of the GTX 1080 Ti GPU.

Styling is unquestionably sharp although the red and black colour scheme is beginning to feel a little tiresome. Gamers who haven't settled on a final colour scheme for their build may well end up building their system around a graphics card like this. It's an eye-catching centrepiece for any build although MSI fans looking for something a little more exclusive and flexible may do well to consider the Lightning Z instead. 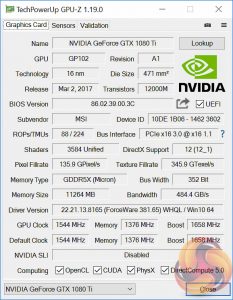 Clock speeds are undoubtedly conservative in the wider market place but MSI has been cautious in order to preserve the superiority of certain products in its own GTX 1080 Ti portfolio. The Gaming X sits below the Lightning range so the clock speeds of 1,544MHz core and 1,657MHz boost make sense.

Gamers looking for more speed in a simple click can achieve this with the MSI Gaming App. An OC mode can be enabled which boosts frequencies to 1,569 (1683) MHz on the core and 11,124 MHz on the memory. The price to pay for MSI's Gaming X solution, approximately £775, is inevitably a decent chunk above bargain-basement offerings that start from £675.

Let's see how MSI's GTX 1080 Ti Gaming X shapes up through our suite of tests and whether it justifies that extra cost.