If you’ve ever looked in to hard drive failure rates, then you have likely come across Backblaze. The company has recorded percentages for hard drive failures since 2013, deriving its stats from drives in its data centers. Over the last month, Backblaze has had a chance to over its 2017 results, revealing annualized failure rates for drives from all major HDD makers over the last year.

Backblaze uses consumer hard drives to power its cloud storage service for customers. This allows the company to assess failure rates for different consumer drives at the end of each year. By the end of 2017, Backblaze had 93,240 spinning hard drives, this is split into 1,935 boot drives and 91,305 data drives. Backblaze removes any drive that is no longer in production from its results. The company also stipulates that it must have at least 45 drives of each model in order to report results for it. 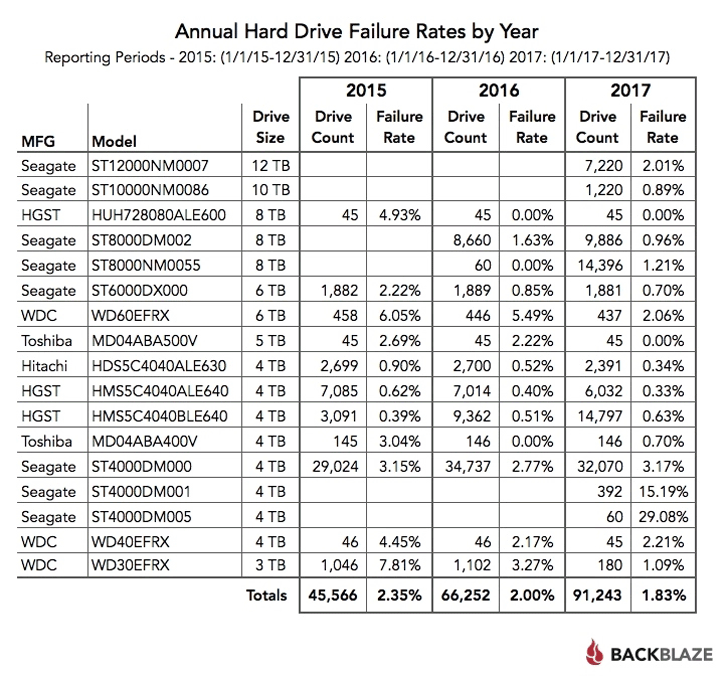 As we can see from the results table above, hard drive failures have decreased year-on-year since 2015. Sample size has also doubled in the last three years, making results more comprehensive. Backblaze had 45,566 drives in 2015 and observed a failure rate of 2.35 percent across the board, a number that includes drives from HGST, Seagate, Toshiba, Hitachi and Western Digital.

In 2017, Backblaze collected results for 91,243 drives, with a failure rate of 1.83 percent across the entire range. Digging deeper, we can see that over the last three years, failure rates for Seagate and Western Digital’s 6TB hard drive models have decreased, with the number of HDDs in operation staying fairly consistent each year.

In all, over the last year, Backblaze had an average of 4.13 HDD failures per day and ended the year having replaced 1,508 drives.

KitGuru Says: These numbers are always interesting to look at, though it would be nice if we could get statistics going over the same number of drives for each model. Ultimately, this would make like-for-like comparisons easier. Did any of you have a bad hard drive experience last year?