To test the Arctic Silentium T11 we are going to use an AMD Athlon X4 635 based system as we feel it reflects what those who purchase a case like this are likely to use.  It is cooled by a Noctua C12P SE14 cooler with Arctic Cooling MX-3 thermal paste applied.

The airflow setup of the T11 is like nothing we’ve seen before in any case and is illustrated in the image above.  We’re interested to see how this unique setup affects the system temperatures.

On the whole, the temperatures we achieved at stock settings are impressive.  The most surprising result is with the Zotac GTX470 GPU that has hit 92c in every other system we’ve tested it in.  We put this down the the rather unusual air hood which channels cool air directly to the GPU.  When the system was overclocked, though, it did hit 92c where it remained due to its predefined fan profiles.

The most disappointing result of all is with the HC01-TC hard drive cooler which let our Samsung SpinPoint F3 hard drive reach a rather toasty 38c!  In every other system we’ve tested this hard drive in it never really strays from the mid-high 20s which makes us seriously question the cooler’s effectiveness.

The motherboard temperatures are also a little high for our liking but this is a likely consequence of having no dedicated exhaust fan in the system.

We replaced the graphics card with a passively cooled HIS Radeon HD 5550 for the noise level testing.

The high-quality fans that Arctic fit as standard make this a very quiet system indeed.

Previous Barnes and Noble Nook Colour – first look
Next Beatles finally make it to itunes – but are they overcharging? 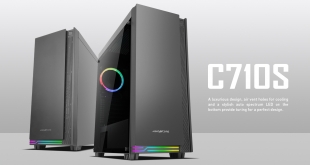 Abkoncore has introduced its new C710S ‘Middle Tower Case’ that, amongst other things, features ‘auto …