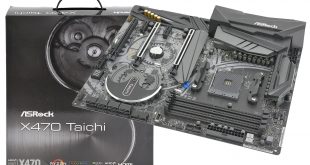 You can tell from quite a distance that this motherboard is an ASRock Taichi as the steel grey look and cog design on the chipset are a dead giveaway. You need to get up close and personal to be clear this is an ASRock X470 Taichi that supports the latest AMD 2nd Gen. Ryzen CPUs (as well as original Ryzen) but yes, we are in AMD country.

Take an extra special close look and you will see this is not the more expensive Taichi Ultimate as there are marked out (but unused) areas for the 10Gbps Aquantia Ethernet and on-board buttons that you get with the Ultimate. Even so, the differences between the two models are so slight that this is effectively two reviews in one.

We like the understated looks of the ASRock X470 Taichi and were not quite expecting the rudimentary on-board RGB when we fired up our test system, but heck we appreciate that sort of bonus. RGB Heathens can, of course, disable the lighting.

As you will see in our video the list of features is fairly predictable and also slightly disappointing. Sure, you get support for dual PCI Express graphics cards and also for two M.2 SSDs but balanced against that the on-board 802.11ac is a relatively slow variety and the Bluetooth is version 4.2 rather than 5.0.

The easiest way to visualise this is to look at the I/O panel where you will see a reasonable array of USB ports but will also spot a fair amount of empty space that is begging for attention. We don’t want to make a big deal out of this but two more USB ports or a DisplayPort output would have made us considerably happier. The thing is, X470 Taichi Ultimate sports 10Gbps Ethernet, which is expensive, as well as on-board Power and Reset buttons that surely cost very little, yet you don’t get them on the basic X470 Taichi. That’s annoying.

Stripping the heat sinks off the VRMs posed a conundrum as the configuration appears to be 16+0 which is simply frustrating. If you can spot the ‘missing’ SoC VRM hardware do please add a comment to the video.

***UPDATE -KitGuru readers are confident the VRM arrangement is 12+4 ***