Samsung has become the first tech company to receive global recognition for environmental sustainability of its semiconductor solutions with its 512GB eUFS 3.0 memory, earning the Carbon Footprint and Water footprint certifications.

The company announced its 512GB embedded Universal Flash Storage 3.0 has been awarded Carbon Footprint and Water Footprint certifications by the UK-based Carbon Trust at a ceremony at the British Embassy in Seoul, South Korea. Samsung is the first company in the mobile memory industry to achieve this certification, which has been made possible by its extensive efforts to significantly reduce carbon and water footprints.

In addition to the certification from the Carbon Trust, Samsung’s 1TB eUFS 2.1 and fifth-generation 512Gb V-NAND also received Environmental Product Declaration labels from the Korean Ministry of Environment. The Carbon Trust is a non-profit certification body set up by the UK government in an attempt to accelerate the transition to a sustainable, low-carbon economy. Each certification granted by the trust is made after a thorough assessment of the environmental impact of carbon emissions and water usage based on international standards. 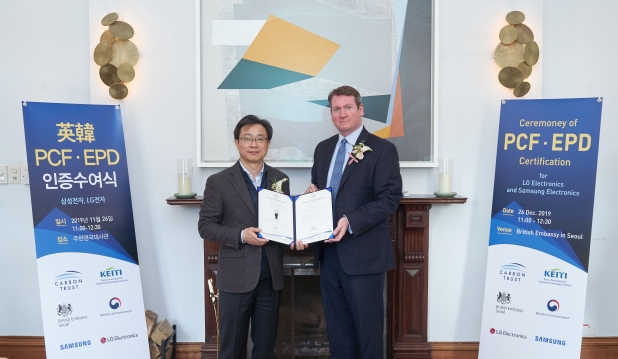 “We are extremely pleased that our cutting-edge memory technologies not only demonstrate our capability to overcome more challenging process complexities, but also are recognised for their environmental sustainability,” said Chanhoon Park, Executive Vice President and head of Giheung Hwaseong Pyeongtaek Complex at Samsung Electronics. “Samsung will continue to create memory solutions that provide the highest levels of speed, capacity and power efficiency at extremely small geometries for end-users worldwide.”

Production of Samsung’s fifth-generation V-NAND is manufactured using a unique etching technology that pierces more than 90 cell layers in a single process step, which helps to minimise the overall increase in carbon and water footprints per V-NAND cell layer. Samsung plans to expand its highly sustainable premium memory solutions into more flagship mobile devices in the future to reduce environmental impact.

KitGuru says: It is great to see that even huge companies such as Samsung understand the impact manufacturing has on the environment and are finding new production techniques to minimise carbon output.