It’s no surprise that the Asus ROG Strix Z370-I Gaming is a good-looking product. The PCB is black and all of the ports, sockets and connectors use black too – so the trio of gunmetal grey heatsinks stand out even more.

As with last year’s Z270-I board, a row of RGB LEDs is installed on the underside of the PCB, with twelve LEDs that can be controlled through the Asus Aura software. That’s paired with the strip of RGB LEDs that’s included in the box.

That same side of the board is the busiest. Above the 24-pin power connector is a tiny row of debug LEDs, and there’s the front panel connector, two SATA ports, a speaker connector, an addressable RGB header and a USB 3.1 Gen 1 connector. 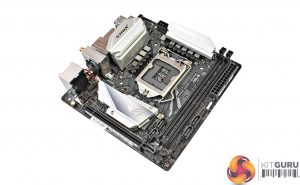 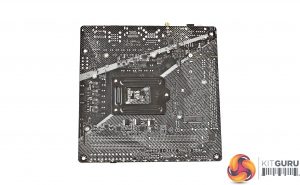 Move a centimetre inwards and you’ll find the two memory slots, which support up to 32GB of DDR4 at an overclocked speed of 4,333MHz – a little higher than last year’s equivalent board. Two more SATA connectors sit on the other side of the memory slots, although these are a little cramped.

The new version of the LGA 1151 socket is surrounded by two VRM heatsinks. This year the new Coffee Lake chips are governed by a four-phase design, and Asus has retained the two dedicated phases for the integrated graphics chipset and the single phase for the memory.

Below the processor socket is Asus’ clever Double-Decker M.2 heatsink. It’s a good-looking lump of metal that can be removed with two screws and used to cool down an M.2 SSD that may throttle if it gets too hot, but that’s not its only talent – beneath the M.2 connector is a second heatsink that chills the PCH. 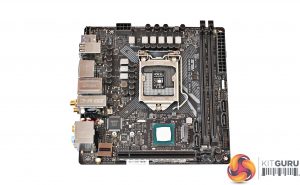 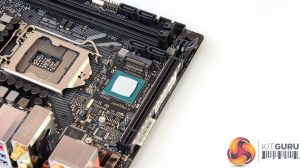 There’s the usual sole PCI-Express x16 slot at the bottom of the board, and it’s reinforced with steel to help support hefty graphics cards.

The audio gear sits beside the PCI-Express slot. It’s the same setup as the older Z270 board, which means the Realtek S1220A HD codec with 113dB SNR line-in and 120dB SNR line-out and Asus’ own SupremeFX shielding. There’s an OPA1688 operational amplifier, too, alongside an RC4580 dual operational amplifier, and the same Gold Series Nichicon audio capacitors are used again.

In fact, there’s no real difference between the audio gear on this small board and on Asus’ latest ATX products, which means you’re going to get a good-quality audio experience no matter which form factor you choose.

That covers the journey across the heart of this small board. Once that’s done, you’re at the rear I/O, which remains one of the most impressive in the mini-ITX marketplace right now.

It’s got four USB 3.1 Gen 1 connectors, which is an improvement over the Gen 2 connectors on last year’s board. One of those USB 3.1 sockets is a Type-C port, too. There are four slower USB 2 ports, the full offering of five audio jacks, an optical S/PDIF output and both HDMI and DisplayPort outputs.

The Gigabit Ethernet connector is controlled by the Intel I219-V NIC, and the WiFi chip is capable of handling dual-band 802.11ac traffic. Bluetooth is included, and on the new board it’s been upgraded from Bluetooth 4.1 to version 4.2. 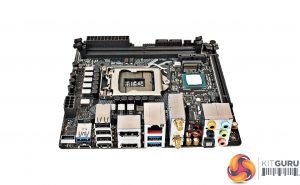 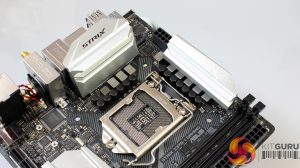 There’s a USB 3.1 Gen 2 connector for the front panel, which is useful if you’ve got a rare enclosure with front-facing USB 3.1 Type-C. At the back there are quartets of USB 3.1 Gen 1 and USB 2 ports alongside an optical S/PDIF connector, five audio jacks, the wireless aerials and both HDMI and DisplayPort outputs.

The top corner of the board holes the eight-pin CPU power connector and the CPU fan connector. It’s one of three 1A/12W fan connectors on this board, but it’s the only one that’s easy to access: one sits between the WiFi module and the board’s largest heatsink, while another is found between the M.2 heatsink and the PCI slot.

The tricky fan connectors and a couple of cramped SATA ports are the only real issues with the layout on this board, though – considering the tiny footprint and the wealth of features to be found here, Asus has done a good job.

There’s another feature on the rear of the board – the second M.2 connector. This setup mirrors last year’s board, and this second connector supports both PCI-E and SATA-based M.2 SSDs.