Intel may have released new Coffee Lake processors, but don’t be fooled by the revised LGA 1151 socket and Z370 chipset. Aside from a few minor changes and some alterations to cope with the six-core CPU’s increased power requirements, very little is new.

Because of that, Z370 motherboards are going to bear a strong resemblance to their Z270 counterparts. That might disappoint people searching for truly new products, but we’re not upset: last year’s version of this board was outstanding, and the Asus ROG Strix Z370-I Gaming is another excellent product.

It’s good-looking, with smart metal heatsinks and RGB LEDs, and the good physical design is paired with an intuitive UEFI and solid software – even if there’s nothing fresh in this department. It’s got debug LEDs, beefed-up SupremeFX audio, and two M.2 sockets.

Asus continues to use its Double-Decker heatsink on the primary M.2 socket and above the chipset, and it continues to work well – we never had any SSD-related thermal issues. Connectivity includes solid wired and wireless offerings alongside a minor Bluetooth update.  It’s got a USB 3.1 Gen 2 front panel connector, even though this standard still hasn’t made it to the rear I/O.

That’s a little disappointing, but the back of the board is still packed with USB 3.1 ports, display outputs and audio jacks. Aside from high-end features like Clear CMOS or BIOS Flashback buttons, there’s nothing missing from the average ATX product. 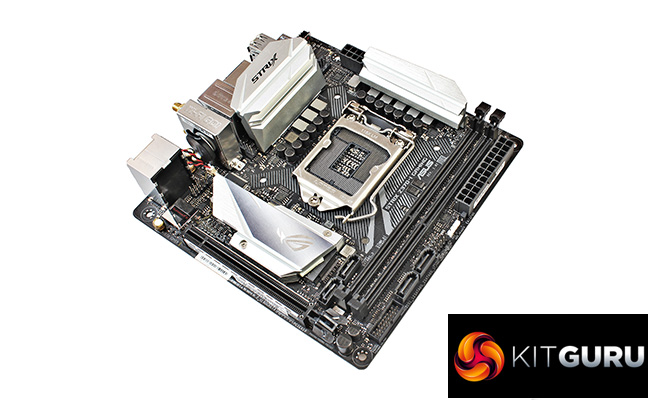 The performance is largely the same as ATX boards, too. The mini-ITX Asus board delivered the same sort of benchmark results that we’d expect from an ATX board with a Coffee Lake Core i7 chip, and the new CPU architecture could be seen working well in CPU-intensive games tests, the 7-Zip benchmark and in Cinebench. The two extra cores are clearly well-implemented.

The Asus board delivered slightly lesser memory results and was marginally ahead in our NVMe tests, but take these tests with a grain of salt due to different components being used in our test rigs.

The bottom line, though, is entirely positive. There’s no real difference between this board and ATX boards in benchmarks, and it proved stable and adept at overclocking too.

The only minor issues on this board are related to layout – and even then, they’re hardly a surprise. It’s accepted that a mini-ITX board will only have room for two memory slots and a single PCI-Express socket, for instance. There are three fan headers, but they’re tricky to reach in between heatsinks and other features, and the SATA sockets are awkward positioned around the memory slots.

There’s a lot to like about this board, even if the minor chipset and socket revision mean that there’s not much new here. It’s got a lot of features considering it uses the mini-ITX form factor, and the layout is mostly fine – issues here are minor. If you’re considering a Coffee Lake upgrade and want to build a smaller system, the Asus board is a stellar choice.

The Asus ROG Strix Z370-I Gaming is available from Overclockers for £195. Asus offers a three-year manufacturer warranty with this product.

KitGuru Says: Last year’s Asus mini-ITX board was the best around, and the Z370 update continues this fine form. The Asus ROG Strix Z370-I Gaming has good performance and loads of features – so it’s a great choice for a small Coffee Lake computer.