Asrock prepares to attack the high end with X99 Extreme6

After so many years of knocking out new processors with silky smoothness using its Tick-Tock production strategy, Intel's ‘Tick-ety-Tock' mis-step on Haswell has left a bad taste in a lot of people's mouths. All the more reason for the market to be interested in the X99 update – rumoured to be hitting the streets in Q3. Asrock seems ready for the change.

The days when Intel enjoyed controlled launches for new products seem to be over. The spluttering stop-start around Haswell, caught a lot of people by surprise and the Z97 launch wasn't any better.

Processors are thin on the ground (although KitGuru has the latest samples being tested as we speak) and everyone is left wondering how big an issue Intel is experiencing behind the scenes to cause such disorganisation.

At times like these, PR folks look around and hope for a bit of distraction. For Intel, that distraction could well take the form of the Asrock X99 Extreme6.

In what would appear to have been the first public outing of a full-blown Intel X99 chipset mainboard at Computex 2014, Asrock is planting a flag: Telling the world that it does not intend to follow when it comes to advanced design.

When the Asrock Z87 OC Formula picked up our Technical Excellence Award for 2013, it was for a product that had become a standard addition to the advanced testing labs for memory companies across the globe. Indeed we found it handled the highest performing memory with substantial overclocking headroom available.

Taking that ability to create fast-throughout boards and then adding in new technologies like DDR4, bodes well for Asrock's X99 offers.

Asrock's Mike Yang told us that his R&D team have spent a lot of time reducing latency in the new X99 boards.

The addition of 12k capacitors, while other companies believe that 10k is high, shows you the kind of focus Asrock is giving to Haswell-E performance.

While Haswell left a lot of people cold, the promise of new high-end CPUs in Q3 – on boards like these  – has us eager for new levels of performance. We have been stimulated. 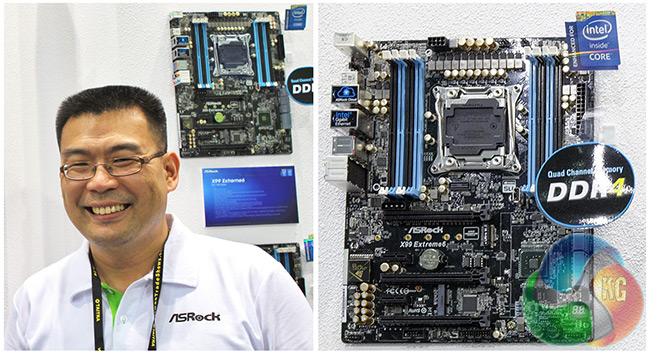 KitGuru says: Will the combination of X99 ‘Wellsburg' and Core i7 ‘Haswell-E' be enough to restore Intel's reputation for nailing processor production?  We'll have to wait and see. Having seen the level of development that the mainboard vendors have put into their new products, we have no doubt that records will be tumbling in Autumn, like leaves off a tree.