MSI is introducing a new feature accessible through the BIOS of most of its B460 and H410 motherboards. The new feature, called CPU Cooler Tuning, allows you to select your type of cooling to unlock “the full potential of the processors”, increasing the power and current limits.

By selecting one of the three types of cooler – boxed, tower air, or water – you can increase the power limit 1 and 2, and current limit, improving the performance of your processor. Taking an Intel Core i5-10600 as an example, the current limit of this processor is set at 140A, while the PL1 and PL2 are 65W and 134W, respectively. These are the recommended power settings if you're using Intel stock cooler, but with a better cooling solution, you can maximise performance by increasing the power and current limits. 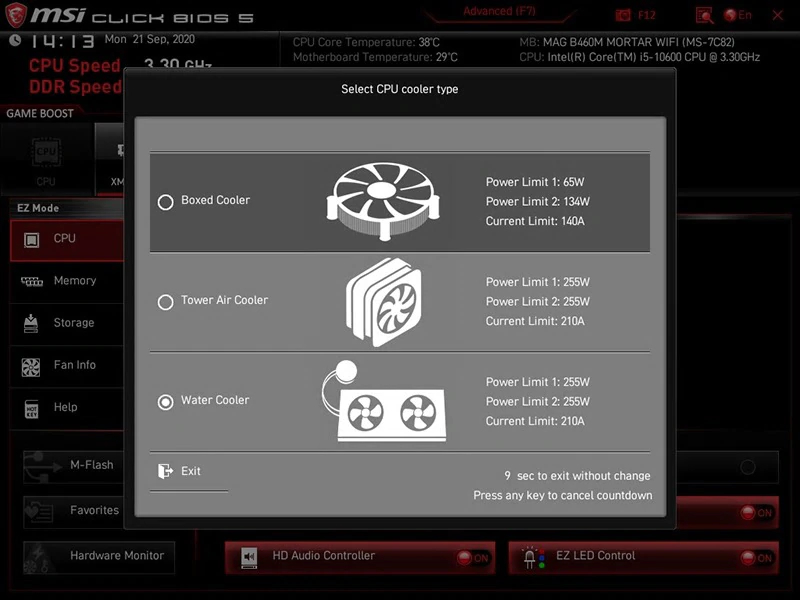 By choosing either Tower Air Cooler or Water Cooler, you can increase the PL1 and PL2 up to 255W, and the current limit up to 210A, depending on your motherboard. The following table details the expected all-core clock frequencies of the Core i9-10900, Core i7-10700, and Core i5-10600 on compatible motherboards.

As aftermarket coolers have started to become a standard in PC building due to their “better noise and cooling performance”, MSI CPU Cooler Tuning feature aims to get the most benefit of your investment.

KitGuru says: Do you own any of the compatible H410 and B460 motherboards? What type of CPU cooler do you own? Will you try MSI's CPU Cooler Tuning?