It has been a long time coming, but today AMD has officially launched the B450 chipset for AM4 motherboards. Up to this point, Ryzen 2nd Gen buyers have had X470 motherboards available to them, but with B450 now landing, there will be more budget-oriented options available.

As you would expect, B450 uses the AM4 socket, which currently supports five different product families. This includes first-gen Ryzen, 2nd Gen Ryzen, alongside new APUs and Athlon processors. Currently, AMD plans to support AM4 up until 2020, so if you buy a motherboard now, you should be able to drop a new processor in down the line without issue. 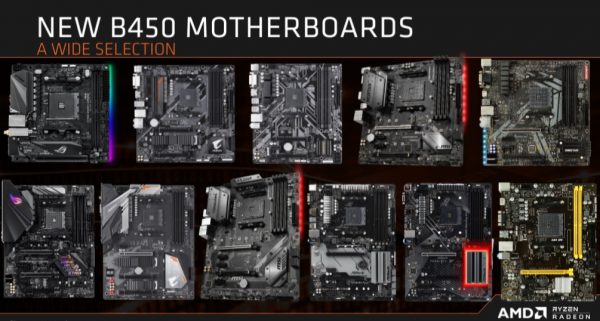 With B450 motherboards, you'll get the same overclocking abilities as X470 and 24 PCIe Gen 3 lanes providing full bandwidth for NVMe and a graphics card. You'll also get access to AMD exclusive technologies, like StoreMI, which allows you to portion off part of your SSD as a speedy cache for your HDD to improve loading times.

There will be a wide selection of B450 motherboards available at launch, which I'm sure we'll see more of later today. Some companies already began showing off their B450 boards at Computex last month, and a leak two weeks ago revealed options coming from Gigabyte, ASUS, MSI and ASRock.

We have a full B450 preview article live with an accompanying video from LEO and some photos. You can find that, HERE.

KitGuru Says: B450 is officially here. Are any of you planning to build a Ryzen-based PC this year? Will you be going with B450 or X470?