When it comes to testing high-end sound cards there are a few synthetic tests we could run to analyse differences between onboard audio – but they are not really reflective of real world usage.

Over the course of a week I played many games, listened to a wide range of audio files and watched a handful of films using various headsets and speakers. I compare the Xonar U5 against the Asus Z97-K with the Crystal Sound 2 chip.

For reference, in testing this sound card I used a set of Razer Mako 2.1 speakers, an ASUS STRIX Pro headset and a Kingston HyperX Cloud (to make sure there was no ASUS bias).

So first things first, gaming. This is the Xonar U5 target audience. To test how effective the ASUS Xonar U5 can be, I used some very atmospheric games, such as Alien Isolation. I am currently playing through this game on the Oculus Rift DK2 (when my underwear washing schedule allows). While this game is atmospheric using onboard audio, switching to the Xonar U5 made a surprisingly big difference.

The virtual surround sound works well with this game. This added a little more of a 3D effect to the stereo field. Overall though it was the clarity and the sheer punch of the frequency range that made a difference. This could be put down to the amplification, which allows you to get a bit more volume than you would with on-board sound – but also the bass boost, which adds a deep and unsettling rumble to the sounds of the Xenomorph scrabbling through the duct work. 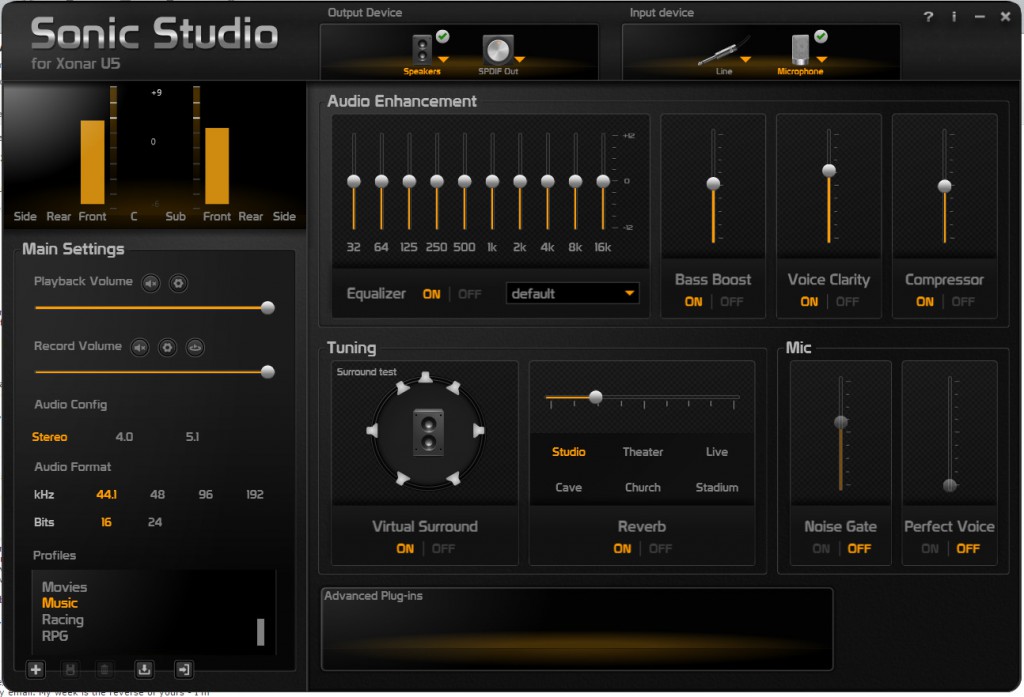 Sonic Studio has a lot of options to play with. Most of the effects are subtle, but significant

It actually got a little overwhelming at times, especially when you are being chased and the alarm's blaring and there are voices crying out for help… the game is nerve wrecking anyway, but switching from onboard audio to the Xonar U5 was noticeable.

Music was similarly punchy, with a distinctly clear mid-range, though you can tweak that through the Sonic Studio's EQ settings. I listened to plenty of different genres of music to put the card through its paces. The Xonar U5 added clarity and impact regardless of the genre, with a slightly richer sound than you would get from the onboard sound solution.

It is worth noting that improvements were not as pronounced through speakers, but then if you have a nice set of headphones that is quite often the case. It may also have been that the speakers we used have their own amplification, so enhancing the signal does not deliver such a noticeable difference. I can imagine the Xonar U5 making the most improvement to difficult to drive headsets with zero amplification of their own.

What if you use some really high quality audio tracks? This is a sound card that can support anything up to 24bit 192KHz recordings, which are  higher quality than an ‘average' MP3. To put it into context, these tracks can weigh in at well over 100MB for a single song.

Classical recordings encoded at this bit rate are beautiful to listen to and the Xonar U5 definitely gives them a more coherent and defined sound signature.

One of the more interesting aspects of this sound card is the number of additional effects you can add to VOIP communication. Designed with multiplayer gaming in mind, where communication is key, switching on voice clarity, noise gate and perfect voice (and playing with the levels) can have a dramatic difference and can help block out background noise too.

Combine this with a decent uni-directional microphone and you could probably have a band playing in the room with you and no one would know!

The only real negatives I have with the Xonar U5 are that sometimes switching between outputs, Windows will default to the onboard sound card. This seems to happen the most when you have only recently plugged in your headset or speakers, so is easily fixed.