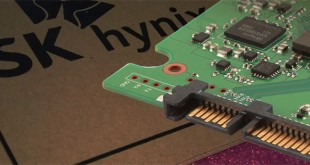 It’s not often that a new manufacturer comes into a mature market, but that’s what we’re seeing in the KitGuru Labs today. SK hynix, one of the world’s largest producers of memory chips, has decided to get serious in the SSD market with the latest SH910A  – almost a year after its toe-in-the-water product. Join us as we put the SK hynix SH920/910A 128GB SSD under the microscope.

Mass market shipment on these drives was originally scheduled for a little later in 2014, but the company believes that it is ready for a summer launch. We will get into detailed product descriptions in a second, first let’s have a quick look at SK hynix as a company.

SK hynix, to give them their full name, is a South Korean semiconductor specialist that was established in 1983. Revenues for 2013 were a healthy $13.3 Billion and it has over 17,000 employees spread across a number of sites. Technically, it was born out of Hyundai (HYundai electroNICS) and it bought the Maxtor hard drive company in 1993.

Promoted from Head of R&D to CEO in February 2013, Park Sung-Wook has a clear vision for the future: He wants SK hynix to become number one in its market. After a few hiccups with a plant fire and forced changes in senior personnel last year, SK hynix definitely seems to be driving forward now.

These drives will be available in a variety of flavours, from 64GB to 512GB.

Today, we’re looking at the 128GB version, which – in KitGuru’s experience – is a good size for budget systems and renewing the life of a laptop.

If you're looking for this in the channel, from resellers, then it will be labelled as the 910A.