First showcased at Computex earlier this year, the Aorus GEN4 AIC SSD 8TB will soon be available to purchase. The card itself is designed to house up to four NVMe SSDs and functions as a multi-way M.2 PCIe adaptor, which allows all four SSDs to operate at full PCIe 4.0 speeds. Inside the device, Gigabyte has implemented four 2TB M.2 2280 NVMe SSDs, utilising Toshiba BiCS4 3D TLC NAND and Phison’s PS5016-E16 controller, since this is the only client controller with a PCIe 4.0 x4 interface currently.

The full spec sheet from Gigabyte lists sequential read and write speeds of up to 15,000 MB/s in RAID 0 mode, as well as 430k/440k read/write IOPS. featuring a PCIe 4.0 x16 NVMe 1.3 interface and a PCI Express card form factor, with 2GB per SSD external DDR cache and a total capacity of 8TB.

Gigabyte label the Aorus AIC SSD as having extreme performance and claim it is capable of read/write speeds up to three times faster than regular Gen4 SSDs in a RAID configuration. Furthermore, an advanced thermal design ensures the controller and memory operate at low temperatures, meaning the Gen4 SSD performance won’t be compromised. 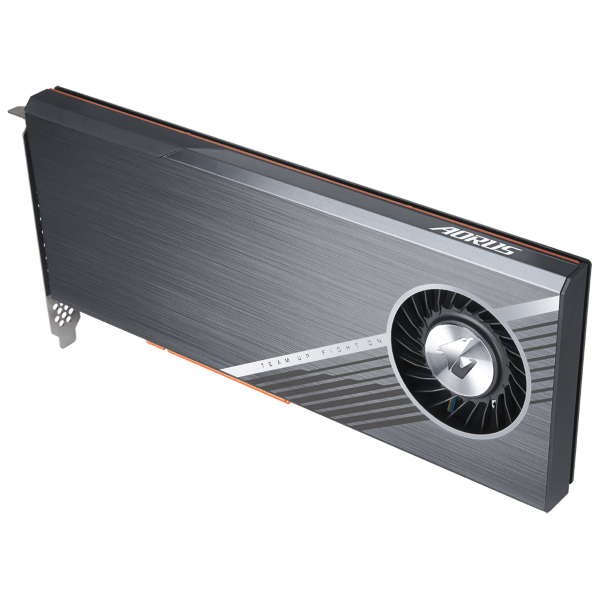 Below the full cover armour shroud, is a 5.5mm thick pure copper heatsink and high conductivity thermal pads covering the four SSDs. A 50mm, two ball bearing, blower type fan pushes air over them and out of the case from the rear. Underneath the individual SSDs is another thermal pad and an M.2 SSD baseplate heat spreader. A durable back plate covers the rear of the card to help evenly spread heat and dissipate it away.

A PC case with plenty of space internally will be required to house the Aorus GEN4 AIC SSD, since the card measures almost 280mm total length, which compares to some of the larger graphics cards on offer. However, it does only take up a single PCIe slot, so it’s not as wide.

The Aorus AIC GEN4 SSD requires a PCIe Gen4 x16 slot to operate at maximum speed. Currently, only AMD's x570 platform and AMD Ryzen 3000 CPUs support this technology but there are some other caveats to keep in mind. AMD's 3rd Gen Ryzen  processors support 24 PCIe 4.0 lanes, so you only get one PCIe Gen 4 x16 slot. With that in mind, if you use this SSD and a discreet GPU, both cards would be running at PCIe x8, which might not be ideal for users with high GPU demands.

With that said, the upcoming 3rd Gen Threadripper CPUs will likely be able to support this SSD at full speed in addition to a discreet GPU.

KitGuru says: Since the introduction of PCIe Gen 4, we have seen a number of ultra high-speed SSDs hit the market to take full advantage. What do you all think of this latest storage solution from Gigabyte?