Kioxia has announced that its CM6 and CD6 series of PCIe 4.0 NVMe drives for enterprise customers are now being shipped, this means that Kioxia is the first company to ship these next-generation PCIe 4.0 SSDs to enterprise and data centre partners.

Both the CM6 and CD6 SSDs are compliant with the latest NVMe specification, with key features built-in such as in-band NVMe-MI, namespace granularity, shared stream writes and persistent event log, as well as being SFF-TA-1001 (U.3) conformant, allowing the drives to be used in tri-mode enabled backplanes that can accommodate SATA, SAS or NVMe SSDs.

Kioxia CM6 series enterprise PCIe 4.0 SSDs provide best-in-class performance with sequential and random transfer speed of up to 6.9GB/s and up to 1.4M input/output operations per second (IOPS). This performance offers customers with bandwidth improvements of up to 2x PCIe Gen 3 device performance and is 12x faster than traditional SATA drives. The CM6 series is designed for enterprise applications such as AI, caching layer, data analytics, financial trading and is available in 800Gb to 30.72TB capacities. 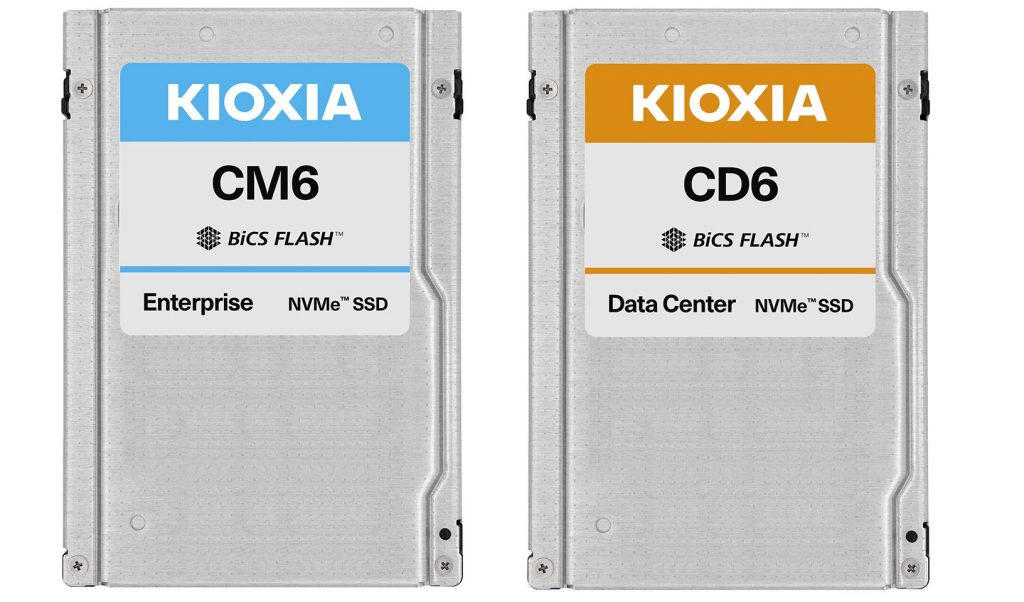 The CD6 PCIe 4.0 SSD series from Kioxia are single-ported drives designed for data centre use, aimed at large-scale deployments and general use scenarios, such as cloud computing, web servers and media streaming. The CD6 PCIe Gen 4 (1×4) NVMe SSDs are available in capacities from 960GB up to 15.36TB with 6.2GB/s throughput and 1.0M IOPS.

“For more than a year, OEM customers have been providing cutting-edge storage performance to end-users thanks to KIOXIA’s CM5 and CD5 Series NVMe SSDs,” noted Alvaro Toledo, vice president of SSD marketing and product planning at KIOXIA America, Inc. “We’re continuing our commitment to lead in the NVMe space by delivering the fastest available 2.5-inch4 PCIe 4.0 SSD solutions.”

Both of Kioxia’s PCIe 4.0 enterprise SSD series include security and encryption features such as self-encryption and FIPS, as well as being on the UNH-IOL Integrator’s list for NVMe 1.4 device compatibility. The CM6 series also successfully passed PCI-SIG Workshop compliance.

KitGuru says: Kioxia was the first company to demonstrate PCIe 4.0 SSD devices and has now become the first to ship next-generation SSDs to enterprise customers. What do you guys think of these CM6 and CD6 SSDs from Kioxia?