Last year, we saw Samsung launch the world's largest 2.5-inch SSD in the form of the $10,000 15.36TB PM1633A. While Samsung did have a lead in the capacity race for a while, this year, they have been beat, with Viking Technologies launching a 25TB and a 50TB SSD this week.

In all fairness, Samsung's 15TB SSD does fit into a 2.5-inch form factor, whereas Viking's 50TB drive takes up more space, with a 3.5-inch enclosure. Still, such a huge capacity is quite the achievement. Viking is launching two Ultra-High Capacity (UHC) Silo Series drives this week, with a 6Gbps SAS interface and rated sequential read/write speeds of 500MB/s and 350MB/s respectively. 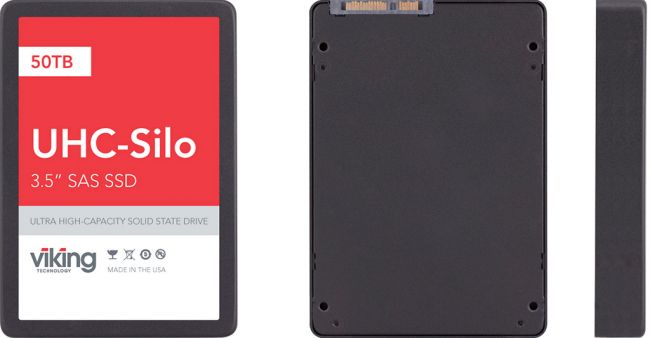 Both the 50TB and 25TB UHC-Silo SSDs use MLC NAND flash memory, though the memory controller in use isn't specifically named. As you might imagine, these are built for datacenters, rather than consumers, so power consumption is one of the major highlights. According to Viking, its UHC-Silo SSD can use less than 10 watts of power when idle, with active power usage only sitting at around 16W.

This means Viking's SSDs increase storage capacity per rack while also decreasing the amount of power used per terabyte. Those power savings really start to add up, particularly in server farms, where power bills are often huge.

Unfortunately, pricing wasn't mentioned in the press release. However, considering Samsung is charging $10,000 for a 15TB SSD, we can hazard a guess at the 25TB UHC-Silo being close to $20,000, with the 50TB being much more.

KitGuru Says: While this sort of technology isn't available to consumers just yet, it will eventually trickle down. Hopefully in a few years time, it will be more cost effective for us regular folk to replace our HDDs for mass storage. How much storage do you currently have in your system?  What size SSD do you currently use?

Previous OCUK’s £999 Gaming Optic bundle gets you a PC, Oculus Rift and Touch
Next Just Cause 3 multiplayer mod launching on Steam next week