Intel Corp. has published images of its forthcoming new-generation NUC (next unit of computing) small form-factor personal computers based in the Core i-series “Broadwell” microprocessors. The upcoming SFF PCs will be slightly smaller than existing NUCs and will support optional technologies that are not available today.

Pictures of Intel’s new NUC 2.0 systems, which are expected to be introduced at the Consumer Electronics Show 2015 early next month, emerged on Intel’s own web-site, noticed ComputerBase.de web-site earlier this week. The images depict new code-named “Rock Canyon” and “Maple Canyon” systems designed for consumer and commercial markets, respectively.

The NUC 2.0 “Rock Canyon” small form-factor PCs will feature 115mm*111mm dimensions and either 29.8mm or 48.5mm height, reports LegitReviews, which means that they will be slightly smaller than current-generation NUCs. The NUC 2.0 “Maple Canyon” are expected to be similar to current-gen commercial NUCs. All three types of systems will look just like today’s NUCs, no design breakthroughs from Intel.

The initial versions of NUC 2.0 systems will be based on Intel Core i-series 5000U-sequence “Broadwell” processors with two cores and Intel HD 5500 or 6000 graphics engines. The new SFF PCs from Intel will sport USB 3.0, HDMI and DisplayPort connectivity, M.2 slot for SSDs, 2.5” bay for HDDs/SSDs, built-in Ethernet (“Maple Canyon” only), 802.11ac WiFi (“Rock Canyon” only) and so on. 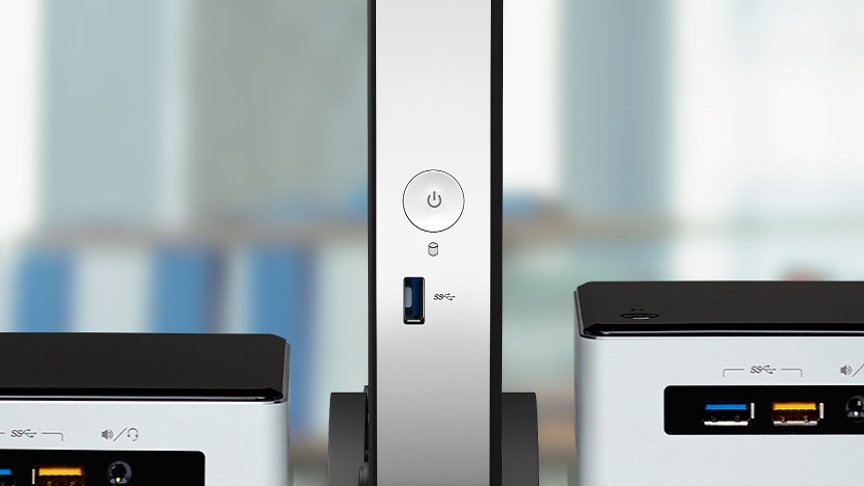 The “Rock Canyon” designed for consumers and living rooms will feature optional NFC technology to connect to upcoming smartphones and tablets as well as wireless charging technology. Both types of systems will feature yellow USB 3.0 connectors that allow charging of devices while the systems are turned off.

The “Maple Canyon” for business customers will feature Intel’s vPro package, including Trusted Execution, Virtualization, Active Management and additional technologies designed to improve security, add remote management as well as other capabilities for the enterprise environments.

KitGuru Says: Intel seems to believe that rather dull steel boxes of NUCs that lack any style will excite consumers in 2015. Perhaps, some end-users will be really impressed with performance of the new NUC 2.0 systems as well as their technical specifications. However, since NUCs have been on the market for over two years now, it is natural to expect Intel to make them aesthetically appealing. Unfortunately, style is a feature NUC 2.0 from Intel will just not have. Perhaps, Intel's partners will create something more beautiful.