A few weeks back, Microsoft made headlines when it denied that it was working on a Surface Pro 5, claiming that there would not be a new ‘Surface Pro’ until it could offer “meaningful change”. It seems that change has come a lot sooner than expected as today, Microsoft lifted the lid on the all new Surface Surface Pro, which has been completely redesigned from the inside out.

Microsoft is to release its new line of Surface Pros from June 15th, with pre-orders starting at £799.00 in the UK and $799 in the US. The new Surface Pro visually resembles the Surface Pro 4, with similar specifications on paper and choices in varieties of model. Both have a 12.3” PixelSense Display with a resolution of 2736 x 1824 (267 PPI), coming in varieties up to 16GB RAM and 1TB of SSD storage space. Despite these similarities, Panos Panay, who is in charge of the Surface Pro redesign ensures that it has been “Completely redesigned from the inside out with all new custom parts” which is further emphasised by dropping the number in its title.

Where the new Surface Pro really shines is under the hood. Using the new m3, i5 and i7 Kaby Lake line of Intel processors, performance is boosted over the Surface Pro 4 and making it “1.5x times faster than the iPad Pro” according to Panay. Paired with a fanless design for all but the i7 variants, it is the quietest Surface made without sacrificing the performance it is known for.

Maintaining the angle that the Surface line is business and creative industry standard, focus has been placed on developing the functionality. This includes a new and improved hinge reaching as low to the desk as 165 degrees and 4096 levels of pressure from the redesigned Surface pen, resulting in the best ergonomics for prolonged use yet. Requiring just 9 grams of activation force and 21 milliseconds of latency, Panay stated that it “feels like writing or drawing on paper”. 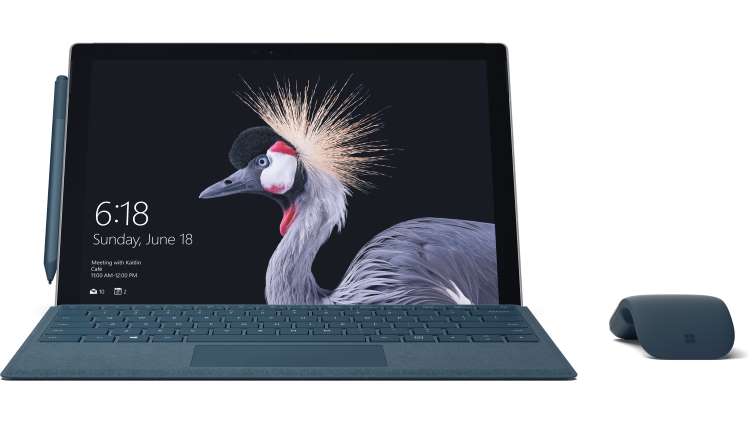 Boasting up to 13.5 hours of battery life, which is 68% more life than Surface Pro 3, being the lightest Surface Pro to date and including an LTE option the new Surface Pro is meant to keep everyone productive all day no matter where they choose to work.

The models at launch will use Windows 10, but Microsoft plan to bring Windows 10 S to the new Surface Pro later this year. Accessories including the Surface Pen, Surface Keyboard, Surface Mouse and later in the year a dongle to convert existing USB 3.0 to a Type-C are all sold separately.

KitGuru Says: While Microsoft was confident enough in the design of their 2015 Surface Pro 4 to not create an updated model until now, it is unusual that it has opted for standard USB 3.0 over Type-C. What are your experiences with the Surface Pro line? Do you plan on picking one up?

Previous IO Interactive set to downsize, still no word on the rights to Hitman franchise
Next Nokia and Apple settle patent dispute with new partnership