OCUK's Asteroid SSF system has received a well-deserved update, bringing Nvidia RTX 40-series and Intel 13th Gen Core components into this compact water-cooled system. It may not be cheap, but 8Pack systems are always stunning and the Asteroid looks no different.

OCUK 8Pack systems offer three SFF models. Meteoroid and Comet were revamped about a year ago, leaving Asteroid as the only one left to be updated. That time has finally come, bringing a custom water loop, flagship-level performance, and unique aesthetics in a compact chassis. 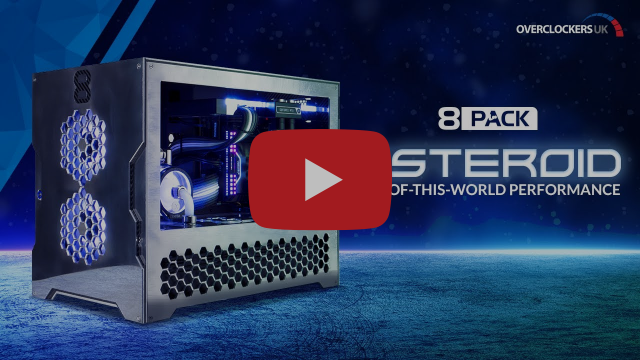 The Asteroid is based on the most recent Intel platform, with an overclocked Intel Core i9-13900K CPU that can boost its P-cores up to 5.8GHz and the E-cores up to 4.3GHz. As expected from a PC that promises to deliver “out-of-this-world performance”, it will include an RTX 4090 GPU. The CPU will be mounted on an ASUS Z790-I Mini ITX motherboard that can pack up to a dual-channel kit of Corsair Dominator Platinum 64GB DDR5-5600. For storage, there's a Samsung 870 QVO 4TB 2.5-inch SSD and up to a WD Black SN850 4TB NVMe M.2 SSD. All this is powered by an Asus Loki SFX-L 1000W 80PLUS Platinum PSU with Pexon hand-braided bespoke cables.

The Asteroid comes with a custom water-cooling solution for the CPU and GPU, including a 20mm distro-plate with the distinctive “8” and EK Water Blocks components and CryoFuel Solid Cloud white coolant. These are then connected to two 360mm radiators with six Noctua Chromax Black 120mm fans and a single 92mm. As for the chassis, it will be available in black plastic or aluminium, sporting a hexagonal layout that provides airflow from all sides. The 8Pack Asteroid is available to order at OCUK starting at £9,688.88.

KitGuru says: If you wanted a system packing the best components in the market, would you consider grabbing a pre-built like the 8Pack Asteroid?