Asus officially announced its Republic of Gamers GR8 mini PC/ Steam Machine some time ago and now we finally know when its coming. The mini PC will release sometime in December here in the UK, featuring an Intel Core i7 CPU and an Nvidia GTX 750Ti graphics card.

The machine will be configurable with up to 16Gb of RAM, users will be able to choose between an SSD and a traditional hard drive, although the whole thing will be easy enough to crack open and upgrade yourself. However you should note that you can only add in new drives or RAM, you won’t be switching GPUs or CPUs. While the GR8 is primarily aimed at those that want a small, console-like machine for the TV, it will come bundled with an ROG Gladius mouse and an M801 mechanical keyboard, rather than a controller. 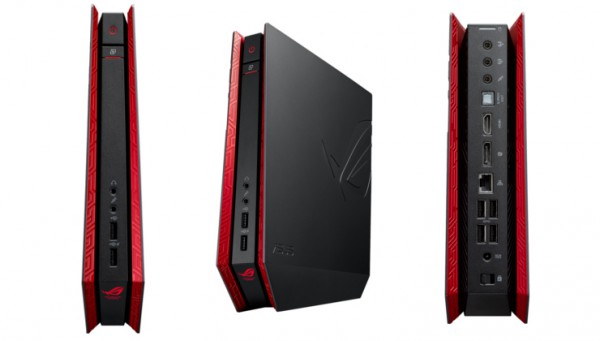 Valve has delayed its Steam controller until next year, so you won’t be seeing it bundled with the ROG GR8. Additionally, Steam OS is still in the testing stages and a full release has yet to be announced, as a result, the GR8 will launch with Windows 8.1 installed and won’t use a custom skin like Alienware’s solution. However, like most PCs, the GR8 will be Steam OS compatible.

According to the ROG GR8 website, the PC will only hit 28dB under full load and will only pull 15 watts from the wall at idle, making it fairly quiet and energy efficient. Besides from the December release window, no exact date has been confirmed, nor has pricing.

KitGuru Says: The GR8 seems to be sending out mixed signals, its a Steam machine- but it doesn’t come bundled with Steam OS. It’s aimed at those who want a small PC for the living room- yet it comes with a mouse and keyboard rather than a controller. The messaging seems to be a bit muddled up. However, the design is pretty spot on. What do you guys think of the Steam Machine initiative? Does it seem a bit pointless until Valve’s OS and controller are ready?