“Did I ever tell you what the definition of insanity is? Insanity is doing the exact… same f*cking thing… over and over again expecting…shit to change…That. Is. Crazy”. This iconic quote from Far Cry 3 is part of what helped raise the series to new heights, but has also loomed over every sequel since. Does Far Cry 6 do enough to separate it from being ‘just another Far Cry’? Let’s find out. 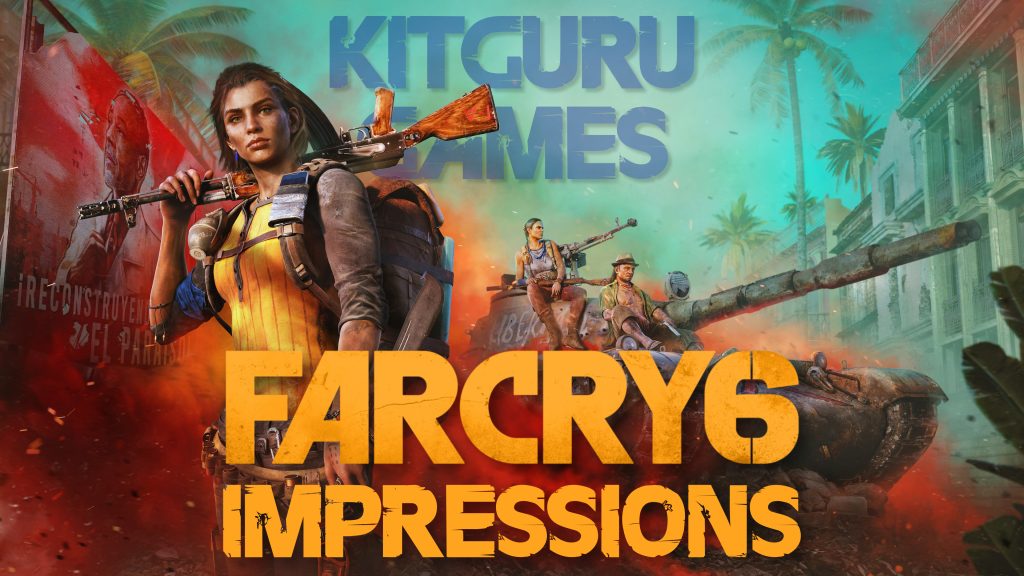 After 6 mainline games, the Far Cry franchise has fully established its concept, gameplay loop, and limitations. Each game has seen you play a mostly faceless protagonist who finds themselves out of their depth in an exotic location ruled by a maniacal dictator. You as the player must then free the country/island from this dictator by destroying bases, strongholds and killing their subordinates. What game in the series am I referring to? It’s hard to tell, because most modern Far Cry games follow this exact blueprint to a tee. Far Cry 6 however, does try some new things.

One of the main things you’ll notice from the get go is the fact that your character is actually given a personality. Named Dani Rojas, you will begin by picking the gender of the character, who will then lend their voices to most scenes involving dialogue. From the outset, Dani is given a much greater role in the game. Unlike previous entries which saw you take the role of a mostly faceless protagonist, Dani has their own distinct personality and motivations. While nothing too complex or elevated, it is enough to let you grow to like the characters themselves, independently of you controlling them. This is further aided by the fact that in cutscenes and bases of operations, your character's view switches to a third person perspective. This all shows a clear effort by Ubisoft to break free of some of the issues plagued by previous entries in the franchise.

Likewise, the supporting cast are also treated with a much higher sense of importance and personality. From the splash screens introducing each character, to the unique stylings of their designs, to their well-done voice acting, the side characters are all enjoyable to listen to. Unfortunately, the depth of their characters still leaves something to be desired. None of the side characters feel like real people – they are simply far too one-dimensional. That being said, they are still fun to interact with, and within the world of Far Cry 6, they fit perfectly.

The Far Cry games are not known for their story, but from the very first trailer, it was made clear that Ubisoft were hoping to lean in harder than ever into this aspect. This goes hand in hand with the focus on Dani and their struggle. Without giving too much away, the opening of Far cry 6 starts strongly, with a linear section serving as an introduction to Dani, their motivations, and the island of Yara. While an exciting opening, once you are established within the world, it quickly becomes business as usual with story moments being few and far between. This is made worse by problematic pacing. The design of the story was clearly made with the expectation that you will spin off to investigate and liberate every base camp available. If you don't do so however, the entire pacing of the story feels off, with seemingly important character moments feeling unearned. Within a short amount of time working with a rebel group, I was deemed the best Guerilla they had – a status which I did not believe I had earned yet. Still, these are early impressions, and so I am hoping this improves over the course of the game.

What is Far Cry without its villains? The franchise had leaned heavily on its cast of antagonists, and Far Cry 6 looks to be the team’s most focused attempt at creating a memorable villain. Played by Giancarlo Esposito of Breaking Bad fame, the game’s antagonistic dictator Anton Castillo is given a strong presence, thanks to the acting of Esposito. Unfortunately, it seems as though Ubisoft’s motion and facial capture was unable to translate this fully. Though not bad per se, it falls far behind many other studios' efforts within the industry. While an excuse could be made for almost every other character in the game, the Far Cry franchise lives and dies by its antagonists, and so it is disappointing to see Giancarlo Esposito’s talents unable to be fully captured by the game.

In every other respects graphically however, Far Cry 6 is a solid looker. With plenty of dense vegetation and foliage, the island of Yara offers a vibrant and massive world to explore. While it can look a bit samey at points (especially when driving from one location to the next) the story moments make sure to offer plenty of visual variety – with some moments even looking beautiful. The one area where Far Cry 6 definitely does not fall behind is with colour and contrast. From the red fires to blue flares, much of your time spent playing Far Cry 6 will see you engulfed in a wave of colour.

The visuals are further aided by the technology and graphical options made available to you on the PC version. AMD’s FidelityFX Contrast Adaptive Sharpening (CAS) helps to make much of the foliage remain crisp and distinct – preventing the trees from mushing together into one giant sea of green leaves. There are many other options also available to you, making for a highly scalable game. From framerate locks; to adaptive resolution (or alternatively AMD’s FidelityFX Super Resolution); field of view scaling and a whole suite of graphics options means that you can tweak the game to look and play exactly how you want. If you have a beefy enough PC, you can even turn on DXR reflections, DXR shadows and HD textures. All of this can be easily customised and tested using the inbuilt benchmark tool for accurate and easy to understand analysis.

Finally, gameplay. While it may seem odd to talk about gameplay last, the reason for doing so is due to the fact that not much has changed in this respect. The game feels like a Far Cry game through and through – and this isn’t a bad thing. There’s a reason that the open worlds of Far Cry are typically littered with so many camps and random encounters, and that is because the gameplay is fun. The same applies to Far Cry 6. Shooting feels satisfying, and each weapon is able to feel distinct. This is further aided by the various attachments which can be equipped. While not as refined as a Call of Duty (or other competitive FPS) the gameplay is solid and the variety of guns allows for a fun and interesting experience. This is doubly so for the ‘Resolver Weapons’ which offer much greater distinct gameplay, visuals and effects – such as the Tostador Flamethrower, El Susurro nail gun, and the shield/revolver combo weapon. I am actively excited to unlock and try out more of these Resolver Weapons.

One of the biggest gameplay-altering additions is that of the Supremo. Initially serving as a form of ultimate attack, the player will purchase and build many different variants over the course of the game. While mostly flashy with little substance, some of the Supremos’ secondary effects can actually be major game-changers. The Furioso Supremo, for example, gives you a mid-air dash with almost no cooldown, heavily altering gameplay and movement. Not every Supremo is as exciting, but this small addition helps to massively keep the gameplay of Far Cry 6 interesting.

Far Cry 6 starts off strong, but quickly goes into a lul, feeling like every other Far Cry game for the past 10 years. Luckily, just as quickly as it gets into that lul, it comes out of it. This is thanks to the unlocking of the Resolver Weapons and the Supremo. I do feel as though these two additions truly help to keep the Far Cry series fresh for another outing. This, alongside the willingness to go out there and be much less serious has helped to make Far Cry feel fun again, instead of the pit of monotony that the franchise was quickly falling into over the course of the past few games.

This, alongside some open-world quality of life refinements – and some genuinely fun, exciting and even epic (in the literal sense of the word) gameplay set piece moments make for by far the most fun Far Cry game yet. Of course, it is fundamentally a Far Cry game, and so if you weren’t sold by the gameplay loop of previous games, you are unlikely to be swayed by this one. Still, from a skeptic of the Far Cry franchise, this latest entry is a far cry from a bad time.

KitGuru says: Are you excited for Far Cry 6? What do you think of the new changes? Will you be picking Far Cry 6 up? Let us know down below.