PS4 remote play is unofficially coming to the PC

We might not be able to play PS4 exclusives on the PC, but soon we can at least pretend that is a real option as a new application is bringing the PS4's remote play feature to the PC unofficially. Sony developed remote play to allow PS4 owners to stream their full console games to the PS Vita handheld but one developer known as Twisted has taken the app and re-worked it for PC.

Remote Play on the PC wasn't entirely out of the question before, though it required an Android emulator for Windows and a bit of tinkering to set up properly. Twisted's unofficial Remote Play app has also been demoed on PC, showing a basic program layout and Infamous Second Son streaming from the PS4: 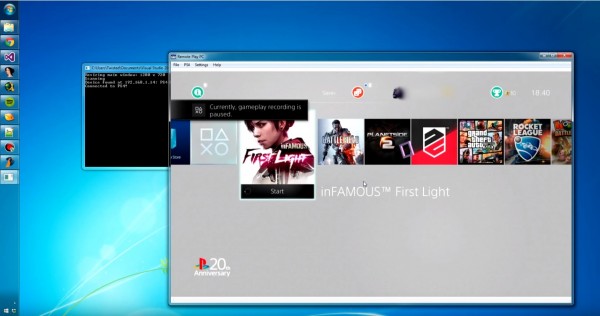 As with a lot of emulators, you can customise the control scheme a little bit and set up a WiFi password for the connection between your PC and PS4 in order to keep everything secure.

In-home streaming has been proven to work quite well over the last year or so with Valve, Nvidia and Microsoft's Xbox One all adopting implementations of it in order to stream games between devices on the same network. Sony likely won't bring this feature to the PC officially any time soon, so for now this is the best option for PS4 owners.

The app won't be free though, it will be available to purchase this week for £6.50/$9.99, after all, developers need to eat. If you need updates or information on where to get the app, you can check out Twisted's Twitter feed.

KitGuru Says: Given that Microsoft has allowed the Xbox One to stream to PC, it wouldn't be such a bad idea for Sony to do something similar. Though that may be less necessary now if this program ends up working well.