Home / Software & Gaming / Console / What’s cool about the Wii U? It plays Wii U games.

What’s cool about the Wii U? It plays Wii U games.

This is one of Nintendo’s big selling points, that it’s hoping will help turn the tide of very sub-par sales of its new console, with new marketing information. In it, the Japanese firm highlights the differences between the Wii and the Wii U and would you believe it, the Wii U actually plays Wii U games.

The new marketing material was spotted by GTTV host Geoff Keighley, who tweeted about it from the PAX East show.  It’s a flyer titled “Why Wii U?” and it features a list of things the WIi U can do, compared with a list of things that the the Wii can (and cannot) do. Unsurprisingly, the list of the Wii U’s achievements is far longer, though Nintendo did leave off the obvious benefits of the Wii: that it’s cheaper and can play GameCube games.

Some of the Wii U improvements include Internal and External storage – though the Wii can also do both of those, albeit in smaller capacities – it plays both Wii and Wii U games, has Netflix and Huluplus (the Wii has that too), can do the Miiverse – does anyone care about that? – Nintendo TVii, WiiUChat, can use the Wii U gamepad, Wii U accessories and all the original Wii remotes (like the Wii can), as well as browsing the internet during gameplay – does anyone do that, other than on their phone? – and 1080p graphics.

The Wii U also has “Off TV Play,” which unless you know that that means playing your full Wii U game on the gamepad, that won’t make any sense to you ; much like this promotion and the whole Wii U marketing effort.

There are still loads of people who have no idea what the Wii U is. The fact that it sounds like a Wii accessory or add-0n doesn’t help. Neither does the fact that it looks basically identical to the Wii and has a lot of the same features.

KitGuru Says: That said, I still want one. Monster Hunter Ultimate just looks so tempting now, especially with all the discounts. Even if it does have a lot of loading screens.

Previous Did NZ give Dotcom residency, to make his arrest easier?
Next Aria array offers affordable gaming from £319 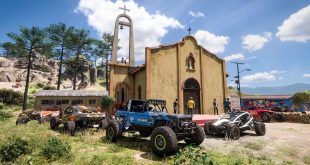