Another leak for Assassin’s Creed Origins lands ahead of E3

Ubisoft has quite the history with its Assassin’s Creed games leaking before they are officially announced. While the company remains tight-lipped on its big return to the series after 2016’s break, we have previously heard plenty of rumours surrounding the game. Now, a leak this week appears to confirm the game’s official title, along with the Egypt setting.

The photo shows a Reservation Card from US retailer Target, with the store’s usual $5 GiftCard incentive for any pre-order. The image on the card shows the title Assassin’s Creed Origins on the backdrop of an Egyptian Pyramid, with what we can assume is the protagonist assassin in the foreground. 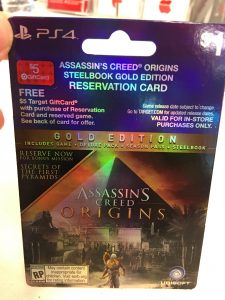 The card hints that Ubisoft will approach the DLC model similar to its previous entry Assassin’s Creed Syndicate, with Origins also featuring a Gold Edition. The Gold Edition will include the main game, a deluxe pack and the season pass, guaranteeing those that pre-order access to a bonus mission, Secrets of the First Pyramids. It is currently unknown if this bonus mission will become available at a later date to those that don’t pre-order.

Ubisoft hasn’t said anything about the latest leak and it likely won’t with E3 being just days away. However, this evidence does confirm a lot of what we have been hearing about this game for over a year now. Unfortunately, while the game might improve in terms of gameplay, Ubisoft’s piecemeal DLC tactics are still in play, with pre-order bonus missions and season passes all around.

We are likely to see an official announcement of the game when Ubisoft takes the stage at E3 on Monday.

KitGuru Says: I am looking forward to seeing how Ubisoft’s break from the yearly cycle has impacted on Assassin’s Creed Origins. What improvements do you want to see for the series?