Loot boxes became the subject of controversy for the Dutch back in April, as The Netherlands Gaming Authority found that some games did breach gambling laws. The country gave developers until today to alter game designs or face prosecution, forcing Valve to make some changes to its Marketplace.

It’s fair to say that Valve helped pioneer cosmetic practices as they are today, with Counter-Strike: Global Offensive and Dota 2 becoming staple titles for the trading and selling of skins across the Steam Marketplace. As of today, Dutch players of either title will no longer be able to access these features as a result of threats from authorities in the Netherlands.

The Gaming Authority, known as the Kansspelautoriteit, didn’t give Valve much direction on how to change its practices aside from the vague statement that “loot boxes contravene the law if the in-game goods from the loot boxes are transferable.”

Given that the Kansspelautoriteit’s outlook is different to that of other countries, Valve has isolated the changes to the Netherlands, apologising to players for the inconvenience. The company is still attempting to engage with the Kansspelautoriteit so that “they may refine their legal demands” and Valve can “find a solution that is less inconvenient.” 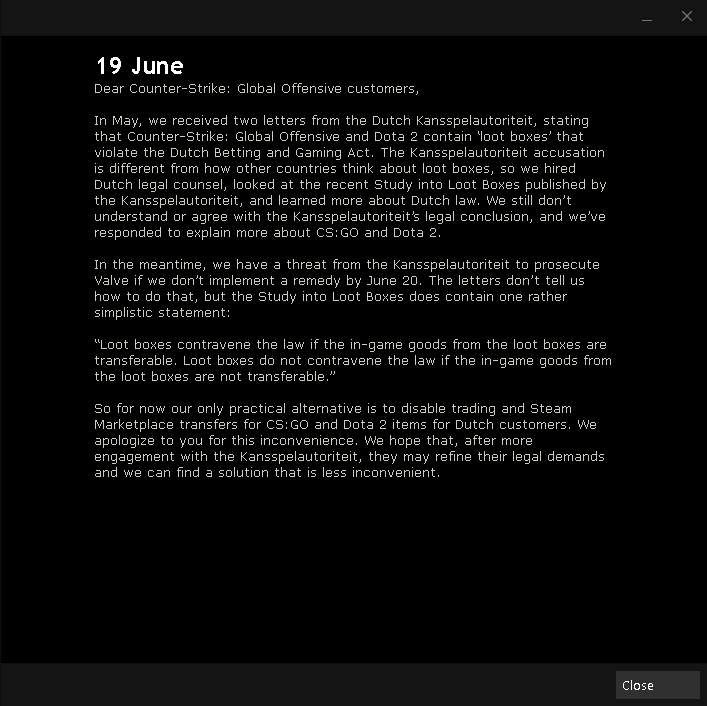 As of today, June 20th, the Gaming Authority has announced that it will be checking in with perpetrators of its initial verdict to see if developers are now compliant with Dutch law. The Kansspelautoriteit avoided mentioning names, however it is believed that EA, Psyonix and PUBG Corp will all be under review thanks to loot boxes within FIFA 18, Rocket League and PlayerUnknown’s Battlegrounds respectively.

Those found guilty of breaching Dutch gambling laws will find themselves at risk of a fine up to €830,000, or alternatively 10 percent of the company’s earnings. “If administrative enforcement does not prove effective, the Gaming Authority can appeal to the Public Prosecution Service to prosecute criminal proceedings,” reads the press release.

The crusade against loot boxes originated from worries over how systems akin to gambling could shape the minds of participants who would otherwise be underage to participate in actual gambling. “There are indications that loot boxes encourage gambling addiction,” explains the Kansspelautoriteit.

“There is consensus worldwide that gambling cannot be played by minors. An adjustment that providers could make is replacing the loot boxes in their game with ‘direct buy’: virtual items that are known in advance can then be purchased.”

Currently, the Netherlands is the first country to impose strict legal action against perpetrators following its refined definition of loot boxes, while other countries such as Belgium and individual US states are still discussing the growing concerns. Worldwide consensus is otherwise divided on how clearly loot boxes pertain to gambling, however, with the UK standing by the practice.

KitGuru Says: While I feel for Dutch players who will now be missing out on features the rest of the world has access to, it’s important for the Netherlands to set a precedence against a practice it firmly believes is wrong. How do you feel about loot boxes? Do you think they are a form of gambling?