Red Dead Redemption 2 received support for DLSS last week and on Friday we took a detailed look at image quality and performance in the game. Today however, three days on from our original analysis, Nvidia published a new Game Ready driver to offer ‘players the best experience possible' when using DLSS in Red Dead Redemption 2. We ran a few benchmarks to see if the performance numbers have changed.

As we noted in our original analysis, the DLSS 2.2 implementation in Red Dead Redemption 2 doesn't offer quite the same sort of performance boost as other titles that use DLSS 2.0+. At 4K for instance, an RTX 3070 gains 20% performance using DLSS Quality mode in RDR2, compared to 39% in Death Stranding and 71% in Cyberpunk 2077.

To see if that changed with the release of the 471.41 driver – our original testing was done with the 471.11 driver, the latest version until today – we re-ran our Red Dead Redemption 2 benchmarks using an RTX 3090 at 1080p, 1440p and 4K, all using DLSS Quality mode. Below you can see the benchmarks from the previous 471.11 driver compared against the new results with the 471.41 driver.

As you can see, the numbers are – unfortunately – identical. Well, not quite identical, but the differences are all less than a single per cent, so that's certainly within our margin for error – and even if they weren't, the changes are completely meaningless. 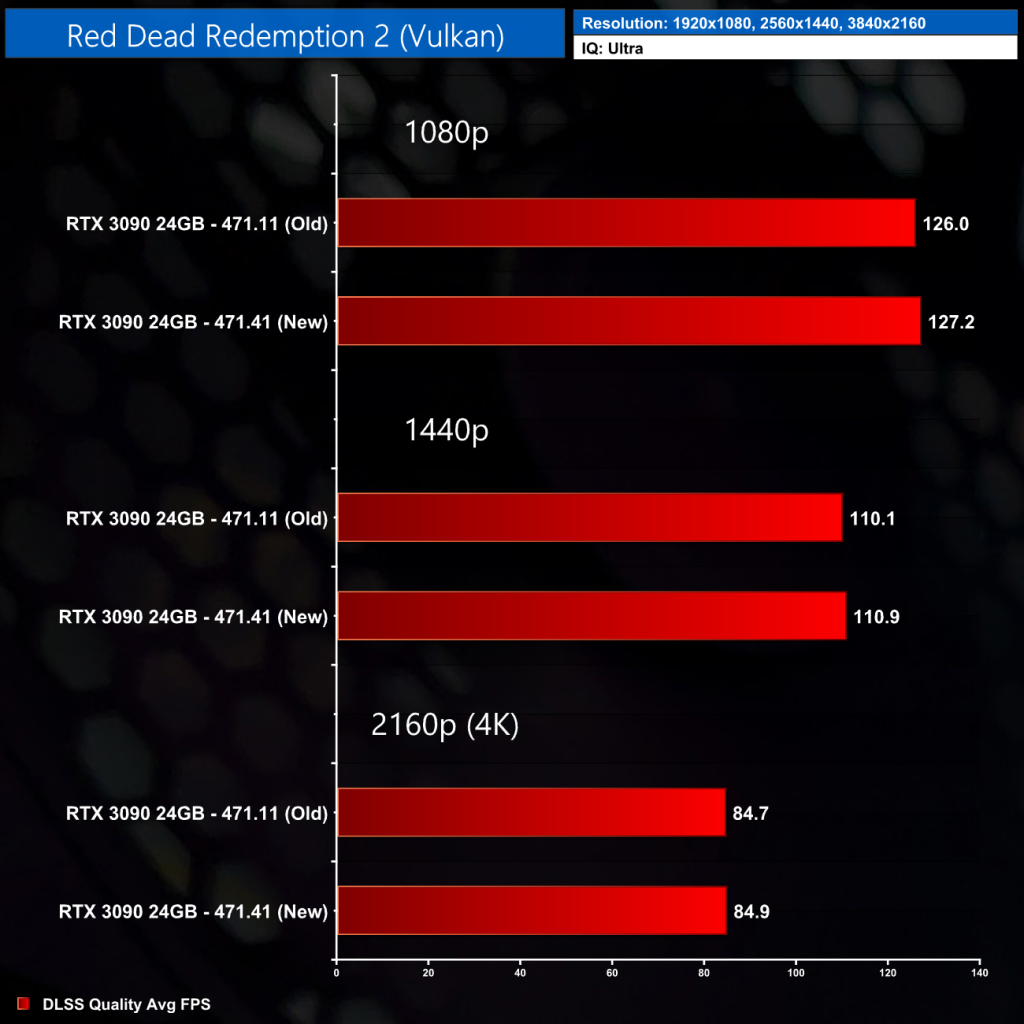 This is of course a fairly ‘quick and dirty' test, as we're only examining one GPU using the DLSS Quality preset, so we've not tested Balanced, Performance or Ultra Performance modes. Still, considering Nvidia's driver update blog makes no specific mention of improved performance, and in fact claims the same ‘45%' boost from using DLSS Performance mode as the original announcement last week, we can safely say improving raw frame rates wasn't the goal of this new driver.

Of course, that means it is possible that the new driver is optimising image quality over performance gains, which would be welcomed as we noted a few examples of image instability in our original analysis. However, for this quick test we've simply focused on raw performance numbers to see if there was any change there – but if you tried DLSS in Red Dead Redemption 2 using the 471.11 driver, let us know if you spot any differences to the visuals with the new 471.41 driver.

If you want to check out our detailed look at DLSS 2.2 in Red Dead Redemption 2, focusing on both image quality and performance numbers, our original video is embedded below:

KitGuru says: I was hoping the 471.41 driver might offer more substantial performance gains when using DLSS in Red Dead Redemption 2, but based on this testing, that isn't the case.