A photograph of the PlayStation 5 developer kit has appeared

We have seen plenty of rendered images of the supposed PlayStation 5 development kit over the past few months. However, an actual photo of the real thing has been revealed online and it looks just like the previous rumours.

Ideas have been floating around online for a while of what the PlayStation 5 will look like when it is released. Renders of how the development kit looks have also been popping up here and there. Thanks to the guys at TweakTown and @ZONEof TECH on Twitter, we can now see an actual photograph of the development kit.

The first real photo of the PlayStation 5 development kit confirms the previous speculated images of the outlandish V shape design has actually turned out to be correct. Not only does it look like a rather funky design, its large vented airflow areas should keep the high-end hardware pretty chilled.

Whether this will represent what the retail version of the PlayStation 5 will look like is still anyone's guess, at least we now know, development versions are out in the wild and being tested. As we can see from the images this is a prototype 1 version, not for resale. 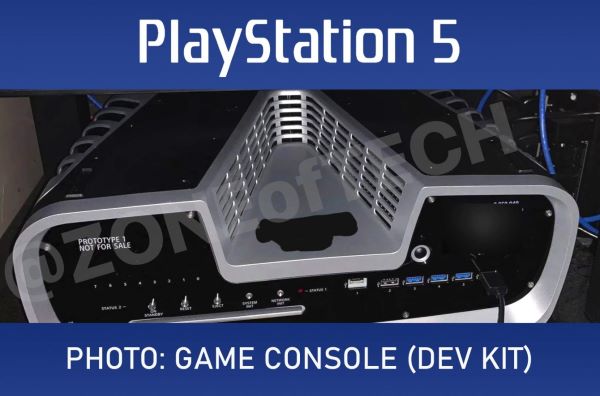 The photo of the prototype PlayStation 5 also shows it featuring On/Standby, Reset, Eject, System Init and Network buttons on the front, along with what looks to be four USB 3.0 ports, a single USB 2.0 port and another white USB port, which is difficult to make out what type this is. A slot possibly for Blu-ray discs sits below the buttons, with a status indicator LED on the side.

Sony is expected to announce more detail regarding the PlayStation 5 in February 2020 with an official launch coming around December.

KitGuru says: It's still quite a wait until next-generation consoles will be launched, so for now, let sit back and admire this development kit for a while.