Riot Games is cleaning up the League of Legends client

In the coming months, Riot Games will make several changes to League of Legends' client. These changes are aimed at improving the user's experience by fixing bugs, improving the client's performance, and reducing the “client bootstrap time” and the “champ select lock-in time”.

According to LoL development team, “the client is not in great shape”. Some problems the team listed include bugs, lag, memory leaks, crashes, freezes, and more. The client had already receive an update previously, but the “problems remain”. Given that the previous approach didn't work, the developer shared “specific performance targets and clear details” of its plans over the next six months.

In a previous client update, Riot added tools to track “basic performance indicators”, such as the time to boot (bootstrap time). The team aimed at 15 seconds to boot, but there are still cases that “can take up to three or even four times” that time. Another tracked indicator is the “champ select lock-in time”, which is the time it takes for the “client to register” the player input to lock a champion. The chart below results of the average “champ select lock-in time” in both patch 9.22, and patch 10.2. 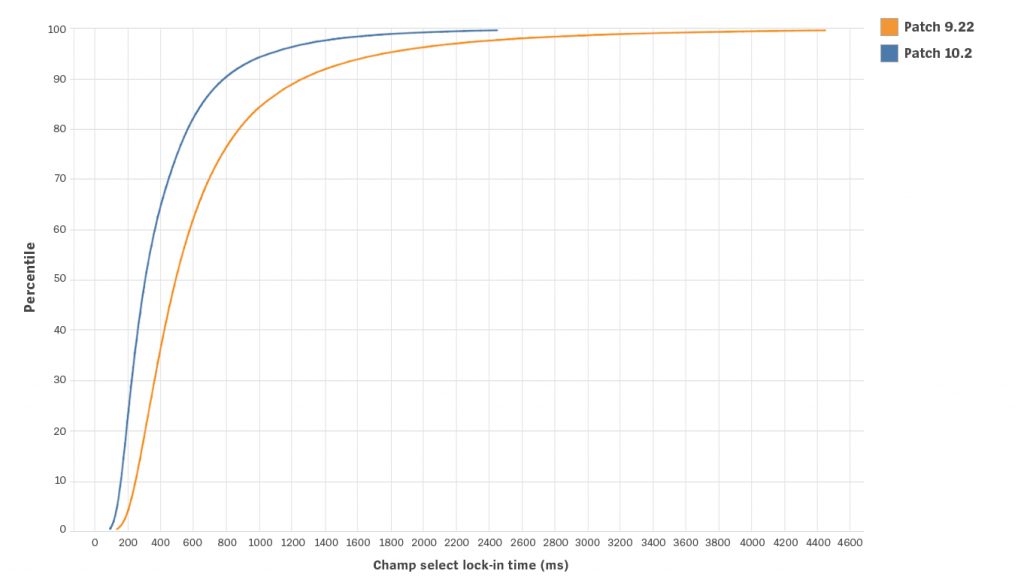 The improvement observed from patch 9.22 to patch 10.2, comes from the update to the chromium engine made in patch 9.23, yet these results are still not at the level the team wants. When looking at the 70th and 90th percentile, there's still a considerable amount of players with a delay of half a second when locking a champion.

Riot's plan to reach these objectives is divided in two phases. First, they will be addressing the bootstrap issues. Second, “near the end of spring”, the team will focus on fixing the “champion select” existing problems. The team will be creating dev blogs to share its progress, “which will include hard numbers on performance” and any changes made to the project's schedule.

KitGuru says: Are you a League of Legends player? Have you encountered any bugs, or suffered crashes or lag while using LoL's client?