Following protests and petitions from groups headed by ex-sex workers in Australia, retailers K-Mart and Target have removed GTA V from the shelves, after claims that the game “encourages players to commit sexual violence and kill women.” This comes less than two years after the Australian ratings board created the R18 classification to allow the sale of adult only video games, after years of anything above a 15 age rating being banned from sale.

However this latest move has nothing to do with regulators, and everything to do with retailers making choices on what they sell, which they are entirely within their right to do. It just seems a shame that they would take it upon themselves to censor their games selection, when regulators have cleared the game for sale and parents can decide whether they allow anyone below 18 to play it.

As usual with violence in games though, there's also some clear misconceptions at play here. While GTA V is understandably violent and gives players free reign to do what they want within it's sandbox universe, violence is committed against all sorts of people, regardless of skin colour, gender or any other defining characteristic. 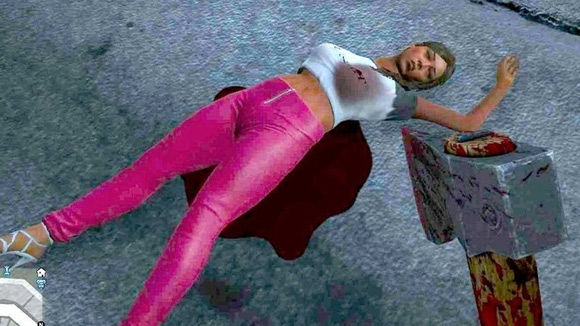 This picture is used as the petition's header. By their standards, couldn't you suggest that this image itself promotes violence against women?

This petition and campaign however, seems driven by a disliking of Youtube clips which show people having sex with an in-game prostitute before running her over and taking their money back. While that might seem like a graphic act to someone that hasn't played a game in the series before, it seems hard to believe that they haven't heard of the on-going gag with GTA titles that even makes it possible. To some extent, hiring and then murdering a sex-worker is the game's calling card.

But the protesters don't appear to ‘get' the joke, nor understand the gameplay: “It's a game that encourages players to murder women for entertainment,” the petition reads. “The incentive is to commit sexual violence against women, then abuse or kill them to proceed or get ‘health' points – and now Target are stocking it and promoting it for your Xmas stocking.

“This is Grand Theft Auto 5. This game means that after various sex acts, players are given options to kill women by punching her unconscious, killing with a machete, bat or guns to get their money returned.”

The petition was created by several ex-prostitutes, who having faced sexual related violence in their own lives, find that games like this cause them “great pain and harm,” despite the fact that they've clearly not played them. They consider them dangerous too, believing that they are “grooming yet another generation of boys to tolerate violence against women.”

While nobody is going to suggest that GTA games are known for their positive depictions of women, they aren't known for their positive depictions of men either. In GTA games, you aren't playing the good guy, you're playing the bad guy, so the things you do aren't going to be nice. It's all a parody of contemporary culture and the ultra-violence is a satire of that obsession in our media. It's exactly the same as films like Clockwork Orange or to a lesser extent, Running Man.

It's societal commentary. You can argue that GTA misses the mark sometimes, but you can't suggest that nobody should be allowed to play it because it offends a small number of people.

KitGuru Says: It's artistic expression. You don't have to enjoy it and you may even find it offensive. But with art, the greatest thing about it, is you don't have to look at it. Plus this game shouldn't be in the hands of children, that's why it has an 18 rating. It isn't grooming anyone.