If you’re a big console gamer but haven’t yet upgraded to the latest generation, be it PS4 or Xbox One, then Activision is hoping to tempt you in to doing so, by offering a free upgrade to the new version of Call of Duty: Advanced Warfare. Buy any copy of the game from the last gen, whether it’s Xbox 360 or PS3 and you’ll get a free digital upgrade to the latest console version in the same family.

Buy an Xbox 360 copy, you’ll get a free upgrade to the Xbox One version. Buy the PS3 version and you’ll get the PS4 version for nothing. Get the idea?

“As fans around the world are gearing up to enter a new era of combat this November, we have great news for those of you who plan to secure your copy of Call of Duty: Advanced Warfare digitally,” said Activision. “Until March 31st, 2015, if you buy a digital copy of Call of Duty: Advanced Warfare, you will be able to download the next-gen version within the same console family for FREE.” 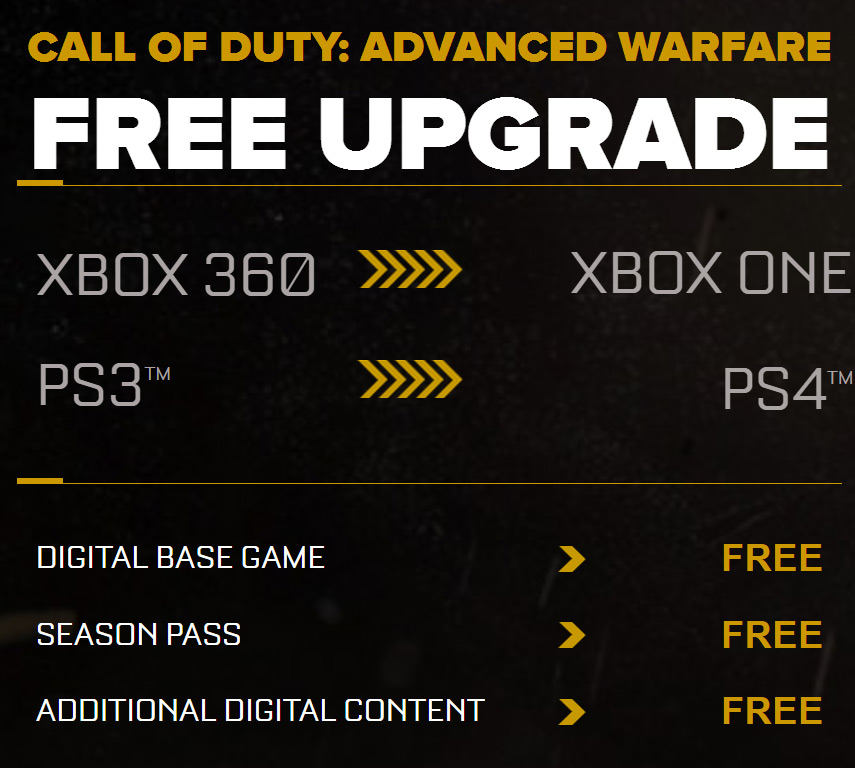 Never has a CoD games had the word “free,” associated with it so much

You’ll also be able to transfer over your Season Pass if purchased for a last-gen system and your gamer score and achievements will carry over to the new console too.

However, bear in mind, you do still need to buy the new-gen console to be able to play your free game and you are only applicable for this offer if you purchase the digital version of the game, not a physical one.

For more information on the deal, check out the FAQ page, here.

KitGuru Says: It’s worth noting that the “upgrade,” works both ways for Sony systems. So if you buy the PS4 version, you’ll also get a digital code for the PS3 edition too.