It has been a while since we’ve reported on a Humble Bundle but this month’s indie bundle includes some pretty good games, such as Shadowrun Returns, Amnesia: A Machine for Pigs, four copies of Risk of Rain and OlliOlli. As always, more games will be announced for those that beat the average donation.

If you don’t want to beat the average donation price, you can donate as little as $1 and get OlliOlli, Insanely Twisted Shadow Planet and Tower of Guns. 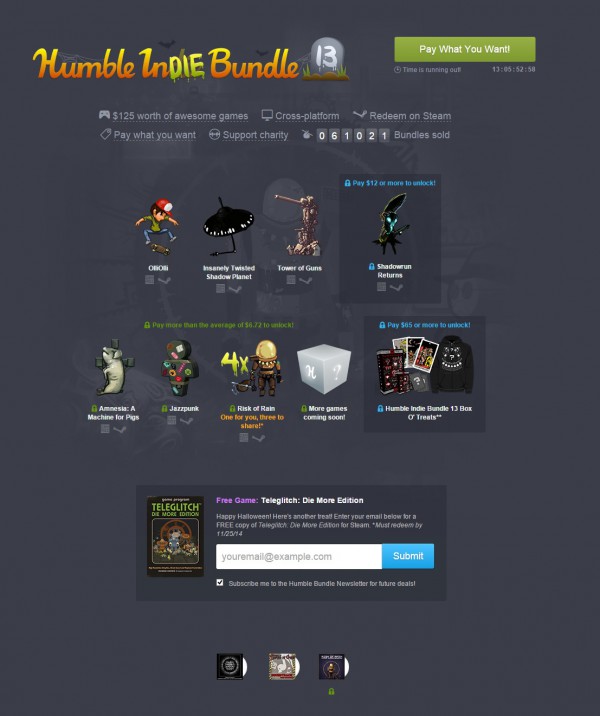 If you beat the average, which is currently $6.72 at the time of writing, you’ll get your hands on Amnesia: A Machine for Pigs, Jazzpunk and you’ll get four copies of Risk of Rain, one for you and three to share amongst friends. Average donation beaters will also receive the extra games once they are announced.

For $12 you’ll get all of the games on the list alongside Shadowrun Returns. Humble Bundle is doing something a little different this time around though, if some of you would like some physical items, Humble is offering up a ‘Box O’ Treats’, featuring what looks like a hoodie, a figurine and some mystery items. The box costs $65 and you will of course get all of the game codes as well.

KitGuru Says: Another solid Indie Humble Bundle. If you don’t have some of the games already then go ahead and grab them while they are cheap, you’ll also be supporting a good cause, which is always nice.