Destiny fans have grown wary of Bungie in recent months, thanks to the introduction of micro-transactions and the change of business model following the launch of The Taken King expansion. While these extra purchases started out as packs of ‘Silver’ to buy social or cosmetic items, it has now evolved in to level-boosters, which sure do cost a lot.

Bungie has experimented with level boosters before. Anyone who bought The Taken King received an instant boost to level 25 for one character but now, these boosts will be sold to lessen the grind. 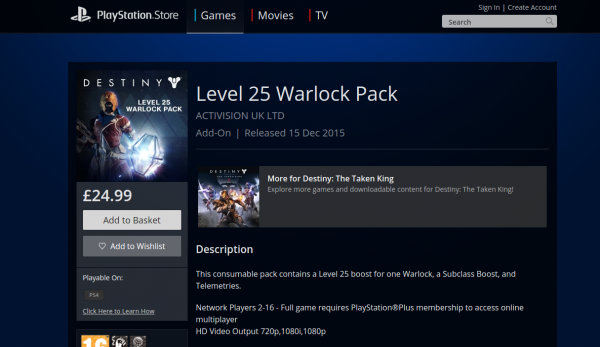 These level boosts can be purchased on a per-character basis and they cost £24.99 each, so they are expensive. Right now, Bungie hasn’t said anything official about these boosts, or made a comment on the pricing but people aren’t reacting too well to the news so far.

This isn’t unheard of for an MMO style game, back in 2014, Blizzard began selling World of Warcraft boosts to level 90 for $60. The studio eventually explained that the price tag was so high to discourage people from simply buying level boosts and missing out on the experience of levelling through quests.

Unfortunately for Bungie, this isn’t the first time the company has been seen as greedy. Earlier this year the studio tried to justify selling three emotes for $20, which drew in a pretty bad reaction from the player base.

KitGuru Says: Destiny won’t be doing two small expansions each year from this point and will instead focus on one big yearly release, so I understand the need to monetize the game slightly to keep pumping out content in-between with new updates and quests. However, £25 for a level boost does seem a little excessive and right now, we don’t know it that is Bungie being cocky with its pricing or if it is actively trying to discourage players from skipping ahead and missing the prior content.