EA is hoping to capitalize on the launch of Star Wars VII: A Force Awakens by tying the release date in with Battlefront III, which is currently being worked on by DICE, who originally began the project back in 2013. The latest Star Wars movie is due to launch on the 18th of December, so we can expect Battlefront III before Christmas.

During an EA earnings call, Chief Financial Officer, Blake Jorgensen, talked more about the publisher's plans for Battlefront, which was originally announced at E3 2013 with a short teaser trailer. EA is currently aiming to have the game “aligned” with the new film, although it won't follow the events of it. 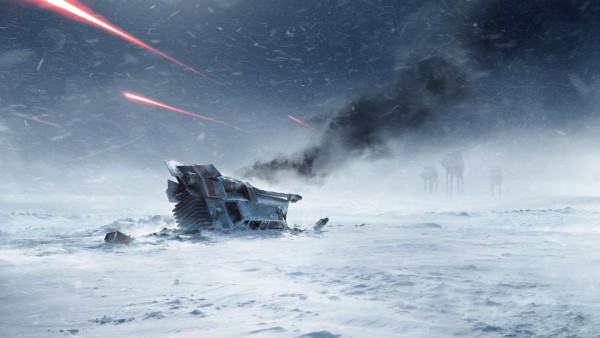 EA's Battlefront title will share universal themes with the movie, although it won't directly follow or intertwine with the events. Familiar locations like Hoth and Endor will be revisited and classic Star Wars vehicles like the AT-ATs and speed bikes will make an appearance.

Since Battlefield 5 isn't launching this year, EA will be giving Battlefront a Battlefield sized promotional budget, stating that the launch will be on a similar scale as its famous shooter franchise.

“We're extremely excited about that,” Jorgensen said about Battlefront. “We think there's huge potential for that title. More to come in the next couple of months on that as more about the movie comes out as well as more about our title comes out. You should consider that a very large activity for us this year and a very large focus–similar to how we've thought about Battlefields in the past.”

EA also has a secret Star Wars project in the works with Visceral Studios, the team behind Dead Space and the upcoming game Battlefield Hardline.

KitGuru Says: EA is planning a huge launch for Battlefront III, which makes sense since it is bound to attract a lot of attention. It will be interesting to see how DICE take on the Star Wars franchise later this year, hopefully Battlefront won't just be a Battlefield clone. Are any of our readers excited for Battlefront III? I was hoping to see a teaser trailer at E3 last year but that didn't end up happening. With the game launching this year though, I imagine we will see something at the event.