Halo Infinite players have grown impatient recently due to fatigue from the game's extended, 6-month long Season 01. This extended season has led to some content droughts, but Season 2 is just on the horizon, going live next week with new game modes. Unfortunately, according to 343's new roadmap, Season 2 will also be incredibly long.

Most of us expected Halo Infinite to switch to quarterly seasons starting with Season 02, like most other games that offer a battle pass and seasonal updates. However, the new roadmap from 343 shows that Season 02 will instead run from May until November. Season 03 is listed as beginning on the 8th of November, but it does not have an end date just yet. 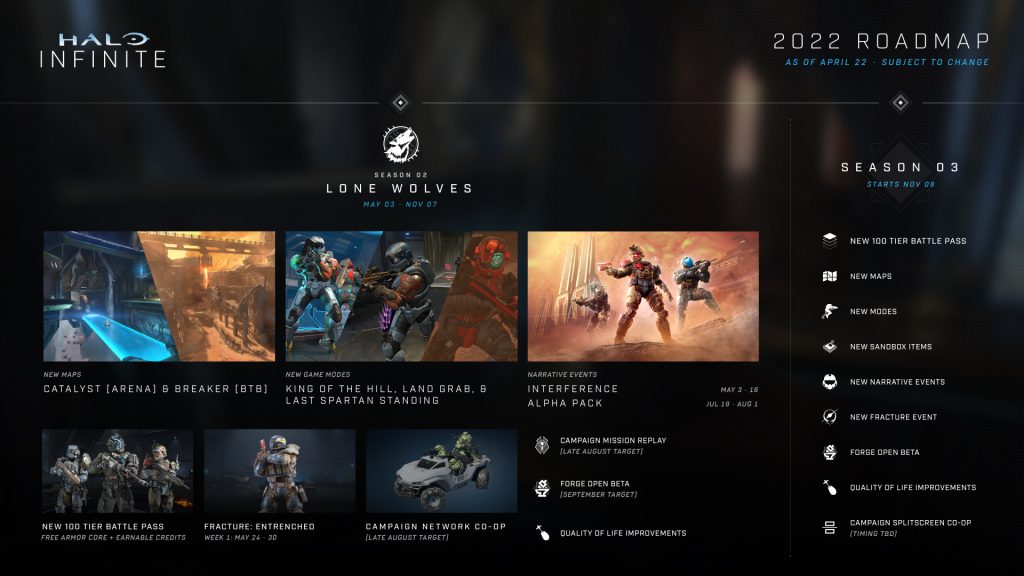 While Season 02 will be lasting much longer than anticipated, the roadmap does give us a few things to look forward to. For starters, new game modes will finally be entering the Infinite playlist at launch, and there will be new timed events taking place in May and July. There is also a new battle pass, and campaign co-op will finally be going live.

In Season 02, online co-op for Infinite's campaign should go live in August, but splitscreen co-op is going to take a bit longer and has been pushed to Season 03, which will run from November and into 2023.

Finally, 343 is also targeting a September launch for Halo's Forge mode, which will go a long way towards providing variety and keeping core players engaged. However, the full version of Forge isn't expected until Season 03.

While Season 02 will be longer than expected, 343 did add that it will be “delivering more content faster”, as well as more regular roadmap updates as development continues.

KitGuru Says: The roadmap doesn't look too bad, but it is somewhat frustrating to see major features still so far off, as well as another lengthy six-month season. It felt like Infinite lost so much momentum this year, but hopefully this next season will have more content drops throughout compared to the first. What do you all think of Infinite's new 2022 roadmap?