Konami gave us plenty of cause for concern in the run up to the launch of Metal Gear Solid V: The Phantom Pain. The unexpected drama that has occurred between Hideo Kojima and Konami in recent months cast some doubt over the final product, particularly where the PC port is concerned. So how does the final game hold up? We decided to take the PC version of Metal Gear Solid V for a spin to see exactly how it performs.

We have only had a handful of Metal Gear Solid games appear on the PC throughout the series’ history, with Metal Gear Solid V obviously being the most recent and most ambitious. We have seen the FOX Engine in action briefly thanks to last year’s Metal Gear Solid: Ground Zeroes, which performed very well on the PC but did that level of care carry over in to The Phantom Pain? 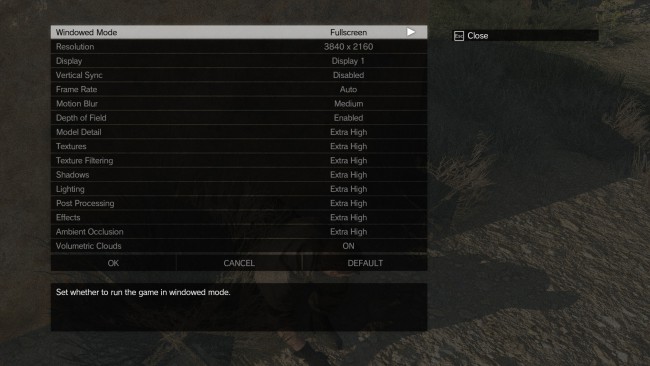 Before we get in to specific performance numbers, let’s take a good look at the graphics options menu. Unfortunately, navigating the in-game menus lacks mouse support, so you are going to have to use the keyboard. I have never been a big fan of this implementation but it is a pretty minor issue.

The graphics menu is decent enough with plenty of options, though for some reason anti-aliasing is missing as a separate option. It is likely bundled in with post-processing so if you feel like any extra AA is needed beyond the ‘extra high’ preset, then you will need to force it through your GPU driver.

Your basic shadows, textures, lighting and effect options all go up to ‘extra high’. For the purposes of our tests today, I cranked everything up to the max, with the exception of motion blur, which I like to leave off, particularly since it doesn’t tend to look good in video form.