Microsoft doesn't have permission to run adverts on the Xbox One version of Destiny- so it isn't. Instead it is taking a fun little jab at Sony's exclusivity deal with Bungie by launching Destiny the fragrance- an unofficial marketing campaign in order to make sure people know that Bungie's next big game isn't just launching on the PS4.

Currently Bungie and Activision are bound to Sony thanks to the content and advertisement exclusivity deal, which lasts until next year's holiday season. So instead of advertising the game itself, Microsoft is advertising Destiny… the fragrance. 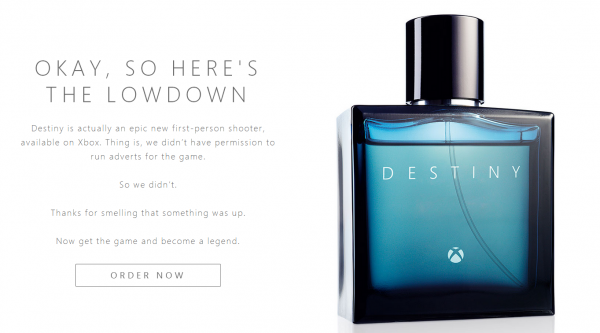 The Xbox team even launched a website, linking users to where they can buy an Xbox One version of Destiny, the game- not the fragrance.

Microsoft is looking to capitalize on Destiny's launch in other ways too. If you buy an Xbox One console next week at a participating retailer, then you will get a $60 title of your choice for free.

For those of us in the UK, we actually have a slightly better deal, although there's a little less freedom involved. GAME is currently running a promotion, if you buy a Kinectless Xbox One for £350, you will receive Destiny and The Master Chief Collection for free.

KitGuru Says: It's fun to see Sony and Microsoft getting a little competitive. It's all in good humor though, I doubt anyone at Sony is particularly mad about Microsoft's advert, they probably find it amusing too. What do you guys think of Microsoft's little ad campaign? Are you a little tempted by the deals on offer?