Earlier today, Sony officially announced that it has acquired Housemarque, the studio behind PS5 exclusive ‘Returnal'. As it turns out, there may be another acquisition to announce, as Sony may have accidentally revealed that it is also buying Bluepoint Games.

In a now deleted tweet, PlayStation Japan tweeted out a “Welcome to the Family” image with Bluepoint Games' logo. The tweet was replaced with one containing the correct image announcing the Housemarque acquisition. 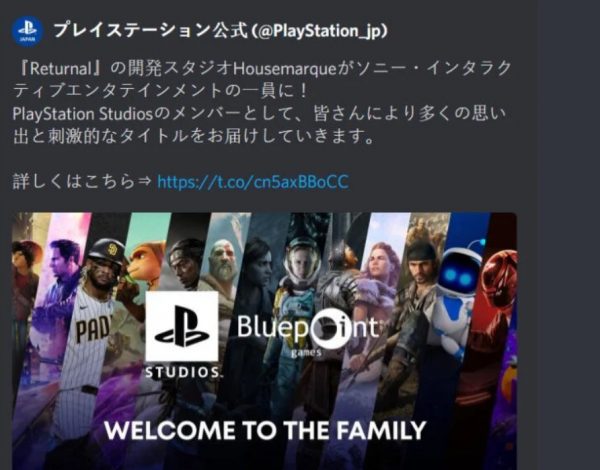 Bluepoint Games has long been rumoured to be joining PlayStation Studios. The studio has already released a PS5 exclusive with the Demon's Souls and previously worked on other remakes, including 2018's Shadow of the Colossus. It is currently rumoured that Bluepoint Games is now working on a Metal Gear Solid remake for PlayStation, although the studio has yet to announce its next project.

Sony has not commented on the Twitter error, so perhaps the deal isn't fully finalised yet, or the company is just saving the announcement for another time.

KitGuru Says: If Sony already has assets prepared, then it seems incredibly likely that a deal has been made between PlayStation and Bluepoint. Hopefully any acquisition announcement also comes with a tease for the studio's next game.