Valve finally opened up Steam’s family sharing feature to all users this weekend, gamers can now give up to five accounts access to their libraries on ten separate devices. However, it’s not as simple as typing in a Steam username and giving them access, you will have to log on to each device you want to authorise and then, when the next user logs in, they will have access to your library.

Not all games will have sharing enabled, any game with third party DRM such as Uplay or the now defunct Games for Windows Live service, will not work. You can’t single out specific games to share either, entire libraries will be available across users and only one person can play a game at a time. That said, as the account holder you will always have access to your games, launching a game somebody else is already playing will kick them out. Steam achievements and save progress won’t be affected as each allowed user will have their own save files and achievements tied to their accounts. 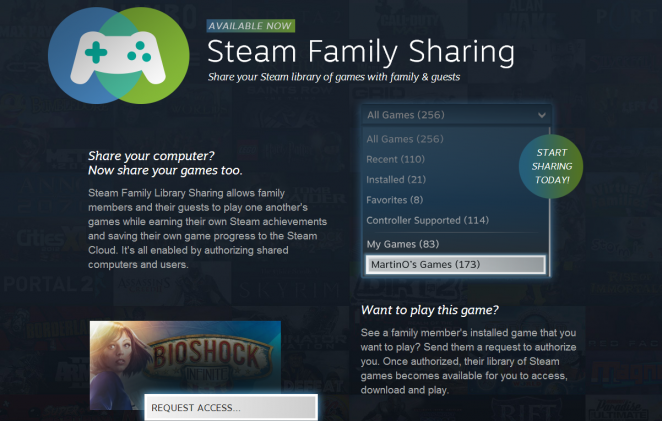 As far as DLC goes, as long as the person you’re sharing games with doesn’t own the base game already then they can access the DLC, otherwise they will have to buy it for their own account.

KitGuru Says: Valve posted a big FAQ answering all of the basic questions, so if there’s anything that wasn’t covered that you would like to know, you can check there. This sharing feature, while still limited, allows us PC gamers to finally share games again, something we’ve not been able to do for a long time. Are you guys going to start sharing games? Is there anything you would change about the way the new feature works?