Google tries to win ex-Stadia users back with free stuff

Ever since its announcement and release, Google’s Stadia has failed to live up to expectations on all fronts, with customers disappointed in the service, and Google disappointed in its sales performance. Still, the company has not yet given up, and is now trying to win back lapsed subscribers by giving free upgrades to the Stadia Premiere Edition which includes a Chromecast Ultra and controller.

As reported by 9to5Google, in the UK, a number of ex-Stadia Pro users received an email offering a new promotion. This promotion will see those with lapsed accounts pay for one month of Stadia Pro, then receiving a free upgrade to the Premiere Edition of the service which comes with not only a Chromecast Ultra, but a Stadia controller too.

In the email, Google told fans “Curious to see what you’ve been missing? Come back to Stadia Pro and score Stadia Premiere Edition—a Stadia Controller and Google Chromecast Ultra, on us—shipping charges may apply.” 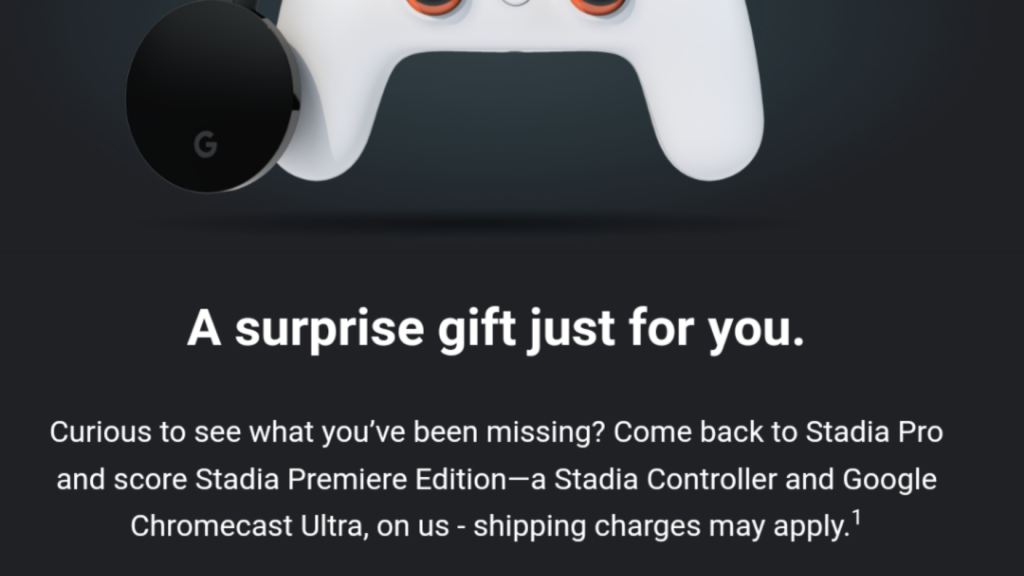 This means is that if you were to receive this email, you would be able to get a Chromecast and Google Stadia controller – a value of £69.99 typically – for the low price of £8.99. Even if you were not planning on using Stadia, obtaining a Chromecast Ultra for just £8.99 is a deal in and of itself.

What this means for the service itself may be troubling, and suggests that Google overestimated the sales and success of Stadia. While it is unlikely that Stadia will ever find the success that Google had hoped, this new promotion may entice at least a few curious customers.

KitGuru says: What do you think of Stadia? Will Google shut down the service soon? How can Stadia succeed in your opinion? Let us know down below.