Four Xbox titles are being offered for free to those who own an Xbox Live Gold subscription for the month of January. The games replacing last month’s Games with Gold titles are: Styx: Shards of Darkness, Batman: The Telltale Series, Tekken 6, and Lego Star Wars: The Original Trilogy. Unlike PlayStation Plus, these games will be available at various times throughout the month, with some being offered later than others.

The first game which will be available between now and the 31st of January is the Xbox One title, Styx: Shards of Darkness. “Infiltrate the impregnable city of the Dark Elves in Styx: Shards of Darkness. Alone or with a friend, sneak past your enemies and embark on a stealthy adventure as the goblin thief, Styx”. You can “deceive your enemies, craft deadly traps and utilize unparalleled freedom of movement to accomplish the robbery of a lifetime.”

Tekken 6, the next free title, will only be available until the 15th of January. This Xbox 360 title (available on Xbox One through backwards compatibility) has you “test your reflexes against the best fighters in the world in Tekken 6. In the sixth version of the King of the Iron Fist Tournament, choose from a wide field of combatants, each with their own brand of deadly techniques and combinations”. The game features “fast-paced action and deep character customization,” allowing you to “discover why this series is among the top of its genre.” 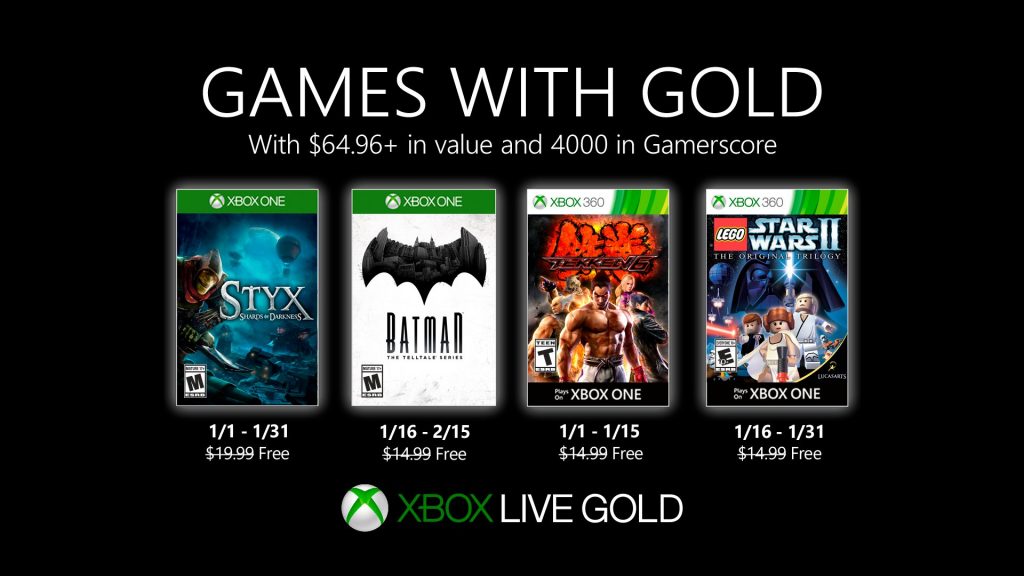 Available between the 16th and 31st of January is Lego Star Wars: The Original Trilogy. If you were disappointed by The Rise of Skywalker, you can instead “return to the epic saga from a long time ago in a galaxy far, far away in LEGO Star Wars II: The Original Trilogy,” where you’ll “play through all three of the original Star Wars films in the tongue-in-cheek LEGO style and humor. You’ll enjoy endless hours brick-building your way to adventure with over 50 of your favorite Star Wars characters”. The game is available on both Xbox 360 and Xbox One.

Lastly, Batman: The Telltale Series will be available to Xbox One owners between the 16th of January and the 15th of February. “Put on the cape and cowl and defend Gotham in Batman: The Telltale Series”. Including the complete season, “step into the fractured psyche of billionaire Bruce Wayne and his dark persona, the Batman”. The game features “a noteworthy rogues gallery,” where “your actions will determine the fate of the Dark Knight in this gritty and violent tale.”

More information on this month’s Xbox Games With Gold titles can be found HERE.

KitGuru says: What do you think of this month’s offerings? Which game interests you the most? Are you subscribed to Xbox Live Gold? Let us know down below.