With us now officially in 2020, PlayStation has announced which titles are being offered for free to its PlayStation Plus members in January. From the 7th of January until the 3rd of February, you can get your hands on the Nathan Drake trilogy, in the form of Uncharted: The Nathan Drake Collection, as well as Goat Simulator, the original wacky physics sandbox game. These titles will be replacing December’s offerings of Titanfall 2 and Monster Energy Supercross: The Official Videogame.

Uncharted: The Nathan Drake Collection is a compilation of the first three games – originally released on the PlayStation 3. Remastered by Bluepoint Games, this 2015 release allows you to play the award-winning trilogy in 1080p and 60fps. Developed by Naughty Dog, Uncharted: Drake’s Fortune; Among Thieves; and Drake’s Deception are three of the highest rated PS3 games of all time. If you missed these games the first time round, now would be a great time to experience the definitive version of Nathan Drake’s Story. 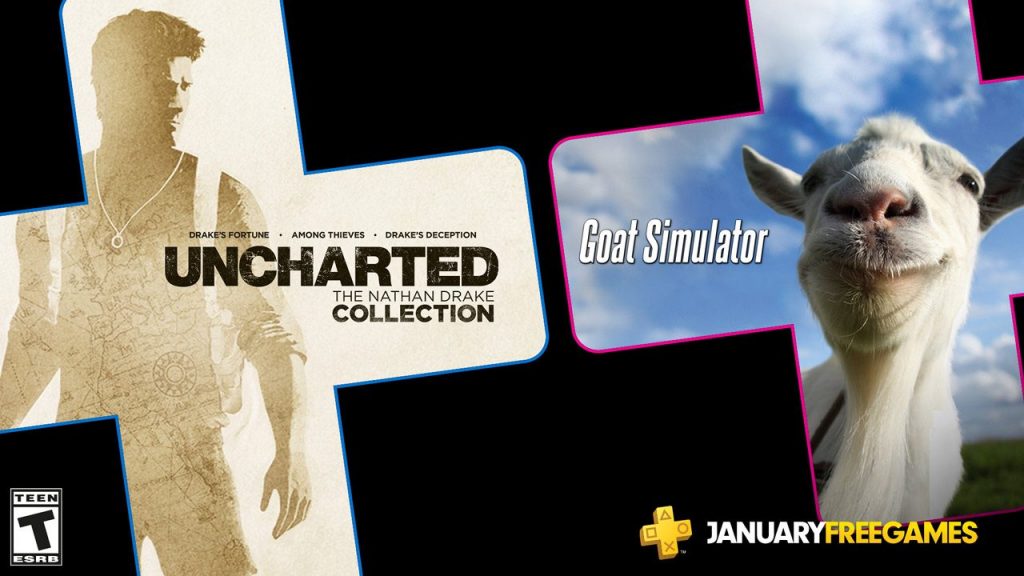 The second free game is Goat Simulator. Described as “a totally bonkers fling-em-up that has you launching a goat at things”, the game originally started as a joke prototype, but later released in 2014 to great success. With a focus on embracing its wacky physics and its litany of bugs and glitches, Goat Simulator offers you an open sandbox with which you can control a goat and experiment and interact with a number of things – all to unexpected results. Receiving mixed reviews, Goat Simulator is a love it or hate it title. If you haven’t played it before, you can now give it a go and decide for yourself whether the game is for you or not.

Uncharted: The Nathan Drake Collection, and Goat Simulator will be available to purchase for free from the 7th of January on the PlayStation Store until the 3rd of February – assuming you have PlayStation Plus. If not, a 12 month membership to PS Plus is currently on sale for £37.49 (25% off), and will give you access to two free video games each month (which will remain in your library and playable for as long as you are a member) as well as online multiplayer – among other benefits.

KitGuru says: What do you think of 2020’s first PS Plus offerings? What is your favourite Uncharted game? What was the first ‘simulator’ game that you played? Let us know down below.