Microsoft has tried many tactics to get Windows 7 and Windows 8.1 users to upgrade to Windows 10 over the last 12 months. However, from the 29th of July onward the update will no longer be free and will probably decrease the chances of some upgrading even further so in one final effort to get people to make the jump, Microsoft has now resorted to full-screen pop-up ads, interrupting whatever you were doing to remind you to upgrade to Windows 10.

Over the next few weeks, Windows 7 and Windows 8.1 users will be receiving full-screen pop-up adverts for their Windows 10 upgrade. However, this time you can just choose not to be notified again. There are upgrade now and remind me later options but also notify me three more times and a do not notify me again toggles. The latter are placed off to the left in purple text that blends in a bit with the background. 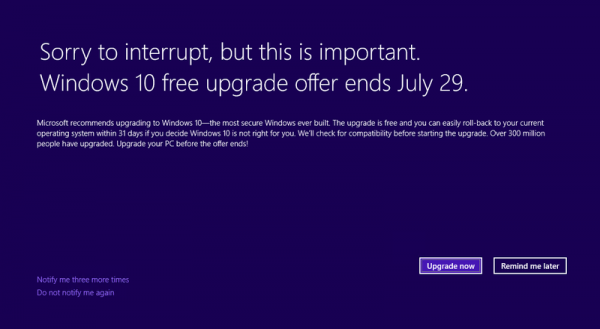 Microsoft's constant nagging to get users to upgrade to Windows 10 has been met with plenty of criticism over the last year. Someone even went to sue Microsoft over an upgrade they didn't want and came out $10,000 richer. Just last week, the company backed down on one of their more questionable tactics, which involved a small pop-up window, where pressing the close button didn't decline the offer.

Microsoft has already confirmed that it will stop asking those on an older version of Windows 10 upgrade after July 29th, when the upgrade is no longer free.

KitGuru Says: This seems to be Microsoft's last attempt to get those sticking with older versions of Windows to upgrade. That said, full-screen pop-ups do seem a little overly forceful. Are any of you running an older version of Windows? Will you be upgrading before the end of July or are you sticking to what you have?