Windows 9 could be revealed September 30th

New reports are suggesting that we could see Windows 9 revealed at the end of September, the OS is supposedly codenamed ‘Threshold' and will hopefully have a smoother launch than Windows 8, which many PC users still refuse to upgrade to, despite the improvements it brings.

This news came from The Verge, citing sources familiar with Microsoft's plans. Coincidentally, this lines up well with other rumours we've heard over the last few weeks. For example, ZDnet recently reported that Microsoft will be releasing a Windows 9 preview at the end of next month, a rumour that now looks much more likely. The preview should give us an early look at the return of the start menu, which is said to feature live tiles in addition to traditional icons. 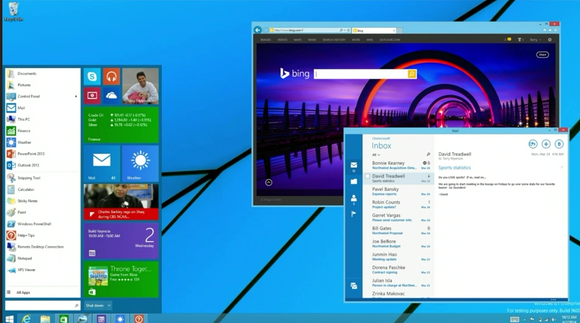 Aside from the return of the start menu, we may see the ‘Charms bar' go away in Windows 9. Current builds of Threshold contain an early version of Cortana, the Windows Phone assistant- it is possible that Microsoft might be thinking about bringing the feature to desktops, much like Apple is rumoured to be doing with Siri at the moment.

At the press event on the 30th of September, Microsoft will go over the Operating System's new key features, it might also talk more about upcoming changes to Windows RT and Windows Phone.

KitGuru Says: It looks like Windows 9 might be just around the corner. If Microsoft improves its UI and focusses more on the desktop experience, will you upgrade? Which version of Windows are you running at the moment?