In the wake of the Edward Snowden leaks from early 2013, the western world and specifically US and British citizens, have come to accept that the NSA and GCHQ have no doubt snooped in our conversations, metadata, Facebook posts and more, with the excuse that they’re protecting us from terrorism. We also know that the NSA sent agents ‘undercover’ into games like World of Warcraft and Second Life, so it shouldn’t really come to anyone’s surprise that the most popular game series ever, Angry Birds, was also used by intelligence agencies to gather up data on average citizens.

Understandably, Rovio, the developer of Angry Birds has released a statement saying that it has no knowledge of any NSA backdoor within its software, or of any data being gathered from it – of course with the current US secrecy laws in place, it’s very hard for any company to tell its customers if it is forced into bed with the NSA. Fortunately that’s soon about to change, so we may have much more candid revelations about how in-depth the relationship between with US-intelligence and some companies have been.

While the NSA activities here are no doubt unsurprising to anyone that’s been keeping up with revelations surrounding the PRISM scheme, the fact that the intelligence agency does and has been gathering smartphone and location information from apps is a new revelation, backed up by internal slides leaked by Mr Snowden in his continued skirt lifting of the US authorities. It explains that along with Angry Birds, the NSA and GCHQ targeted many applications that recorded information on the user, with the intelligence agencies particularly excited about apps that have users uploading images of themselves. 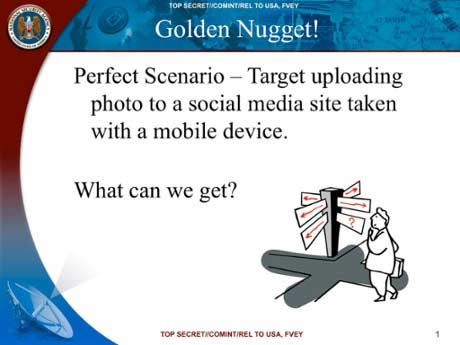 However many apps also broadcast location data, something the NSA was particularly interested in as it believed these could help keep track of terrorists. Of course we know that throughout the past few years of NSA data hoovering, which has involved wholesale metadata collection from US phone calls, as well as much more invasive overseas strategies, has ultimately resulted in the stopping of one or perhaps two terrorist attacks.

Google Maps was a big source of data gathering too. Every time the service was used on a smartphone, the US an British intelligence agencies were able to suction up massive amounts of location data, to the point where (as the Guardian reports), one document from 2008, suggested that anyone using “Google Maps on a smartphone is working in support of a GCHQ system.” What’s potentially worse about this, is GCHQ is happy to share data with its pals in the NSA, who have far less consideration (and laws binding them) when it comes to foreign nationals. Concern has already been raised over the tight nit relationship between the two agencies that could allow both to circumvent safeguards designed to protect their own citizens from being overwatched by the local spies. 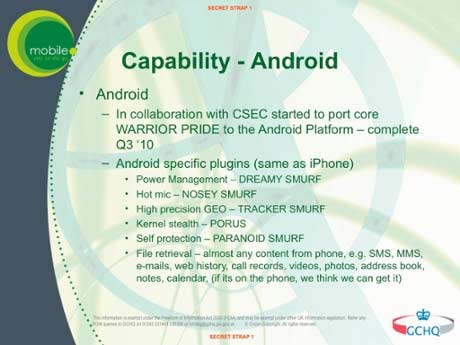 GCHQ has put a lot more time into targeting Android devices than Apple, but the latter aren’t any more secure

While it doesn’t make the revelation any worse, the fact that GCHQ chose to name its data gathering schemes after characters in The Smurfs TV series almost seems sociopathic. They’re called things like Nosey Smurf, Tracker Smurf and Dreamy Smurf.

The NSA has so far refused all calls for it to reveal how much data is recorded from apps, how often, or how and where that data is stored.

KitGuru Says: This is just one more reason not to trust apps to have access to all your data, on social networks and/or your handset. It also highlights how important campaigns like the one being put to the EU Court of Human Rights are. Make sure to give them a few sheckles if you want to see the British government be judged on its privacy invasions.

All images most likely copyright NSA/GCHQ, but we’ll give The Guardian a source credit there too.