Though the Epic Games Store was only initially planning to offer free weekly games until the end of 2019, the platform holder later decided to extend the deal into 2020. Three months into the year and Epic Games are continuing to offer a number of great titles. This week, three games are on offer: Anodyne 2: Return To Dust, A Short Hike, and Mutazione. All three titles will be available to download for free until the 19th of March at 3pm.

Anodyne 2: Return To Dust is a hybrid 2D and 3D adventure exploration title. With a 3D overworld created in the style of a PlayStation 1 game, and a 2D dungeon crawler evoking memories of classic Zelda titles, Anodyne 2 has you “Experience the thrilling and emotional story of Nova. Her destiny is clear: she is the Nano Cleaner who will save New Theland. But strange characters & painful experiences will put her loyalty to the test…” The game saw a positive reception from fans, thanks in part to its “charming and unique” style. Furthermore, the “one-of-a-kind splicing of PS1 with 16-bit aesthetics and formal conventions” makes Anodyne 2 truly stand out from the crowd. If you haven't played the first game, don’t fear, as in a similar manner to the Final Fantasy titles, the entries in the Anodyne series are entirely standalone. 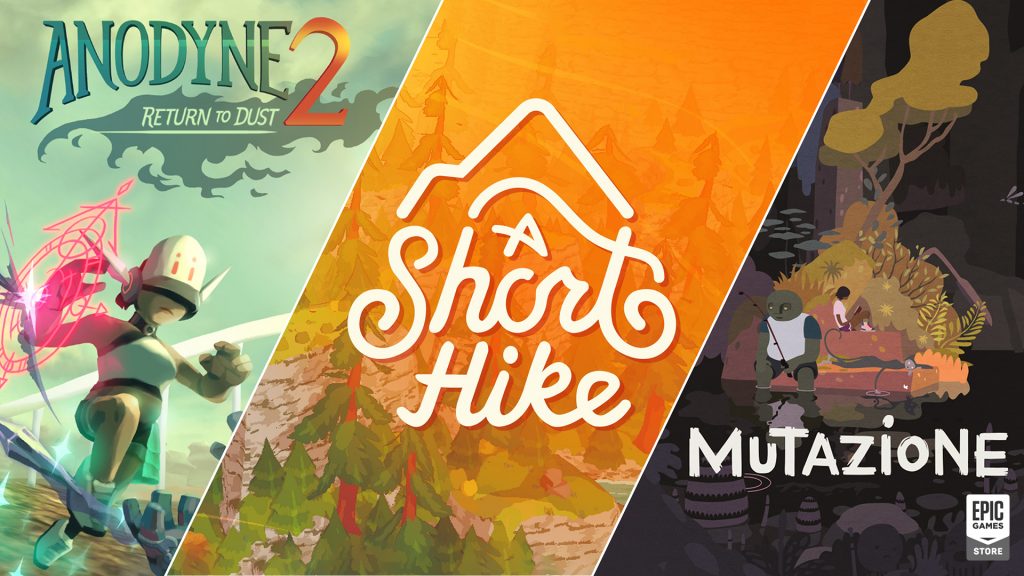 The second game on offer is ‘A Short Hike’. This pixelated isometric 3D casual platformer is all about relaxation and exploration. The game allows you to “Hike, climb, and soar through the peaceful mountainside landscapes of Hawk Peak Provincial Park”. You can either “Follow the marked trails or explore the backcountry as you make your way to the summit. Along the way, meet other hikers, discover hidden treasures, and take in the world around you”. A Short Hike features a dynamic soundtrack with intent to complement your own playstyle. The game encourages you to take your time, explore as you like, and chat with other hikers. The title resonated with both critics and fans alike, and at roughly 2 hours long, A Short Hike stays true to its name.

The final game on offer this week is Mutazione. Featuring a flat and minimalist art style not dissimilar to ‘Night in the Woods’, Mutazione likewise is a supernatural fantasy adventure title where you “Explore the community as 15-year-old Kai as she travels to the strange and secretive community of Mutazione to care for her ailing grandfather, Nonno. Make new friends; plant musical gardens; attend BBQs, band nights and boat trips; and embark on a final spiritual journey to save everyone from the strange darkness at the heart of it all.” The game has been described as “perfect escapism” so if you’re looking for your next supernatural mystery title featuring a great cast of characters, Mutazione won’t disappoint.

All three of these games are currently free on the Epic Games Store, and will remain so until 3pm on the 19th of March – at which point they will be replaced by Indie breakout hit ‘The Stanley Parable’ and open-world action-hacker Watch Dogs.

KitGuru says: What do you think of this week’s offerings? Which of the three interests you the most? Do you prefer 2D or 3D titles? Let us know down below.