All of us spend hours a day in front of a monitor and with the great deals online it would seem that more and more people are moving to higher resolutions – but just how many of you have adopted a 4k or 5k monitor? Yesterday afternoon we asked our social media readers on Facebook about the monitors they use – specifically the resolution they game at.

Almost 3,000 readers took part in our public poll so while its not truly representative of the millions reading KitGuru each month, it does give us a ‘slice insight' into the resolutions you are using at home.

The latest Steam hardware survey showed that 46% of their user base are gaming at 1080p, so It didn't really come as a huge shock that around 54% of KitGuru readers game at the same resolution. It is the most cost effective way to play the latest games, because you don't really need a monster system – a sub £200 graphics card will generate great frame rates at 1080p even with the eye candy cranked. Even those with a higher refresh 1080p panel won't be forced to spend a fortune on a new graphics card. 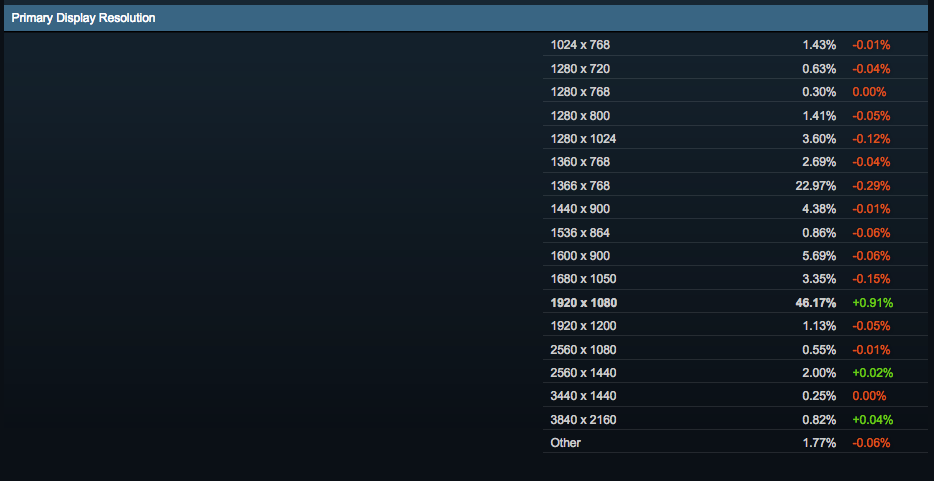 Ultra HD gaming is certainly the future, but capable partnering hardware is still expensive and this is prohibitive for many people. However while only 0.82% of the user base who voted in the Steam Hardware Survey use a 3840×2160 (4k) panel (see above), in our poll we had 9.1% voting that they played games at 4k. These are likely gamers with at least one (or even two) Fury, GTX 1080, GTX 1080ti or Titan graphics card(s).

Another 1.1% of KitGuru readers told us that they gamed at an insane 5120×2880 (5k) resolution – this demographic are likely all using two Titan or GTX 1080ti graphics cards. 5k gaming is immensely demanding on the graphics configuration of the system. Remember 4k is an 8.3 megapixel demand, while at 5k this increases to a staggering 14.7 megapixel overhead.

Some readers actually messaged us to explain their decision not to move to Ultra HD 4k just yet. Eric from Holland said ‘I haven't moved to Ultra HD just yet because I prefer gaming at 120hz on a 1440p panel. I use a GTX1080ti for this and until I can buy a 120hz 4k panel I am not interested in the higher resolutions right now. For me the ultra smooth refresh panels make gaming so much better right now.' Good news Eric, the first 120hz 4K panels are due with retailers in the coming months. You will need at least another GTX1080ti though if you want to get close to a consistent 100+ frame rates at 4k.

Another reader Tim from the UK said ‘I recently bought an ASUS 4K panel on sale at Scan last month, but I need to get a new graphics card. I thought my GTX1080 would be able to handle it but i often have to dial down some of the image quality settings in the new games. I am saving up for another GTX1080 now. When you factor in the cost of the graphics cards, 4K gaming is very expensive, but I love it. My wife wants a divorce tho.'

So, its clear that buying a Ultra HD 4k panel means you may need to upgrade your system, it is a great way to enjoy the latest games – The Witcher 3 in particular looks amazing at 4k. For many though, they would still rather play games at 1080p or 1440p with a high refresh 120hz or 144hz panel.

KitGuru says: Thanks to the three thousand readers who shared their views with us yesterday in our public poll. We hope you find them as interesting as we do.