The public OTA update for Android Lollipop on Nvidia Shield tablets is now live and should be hitting your device some time today if it hasn't already. The update will bring Android's latest user interface, animations and notifications inspired by material design.

Users should experience improved app performance and the update adds support for new graphics APIs. However, in addition to Android 5.0, Shield users will also be gaining free access to Nvidia's GRID servers, allowing instant cloud gaming access for over 20 games at launch, with new additions promised every month. 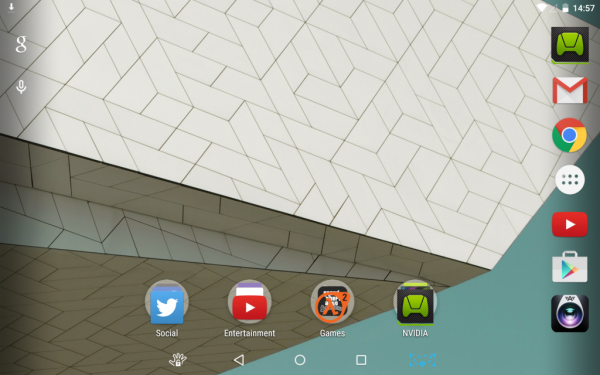 Those who decide to buy a 32GB LTE Shield tablet sometime soon will receive the Greenbox bundle, featuring Android ports of Half Life 2, Half Life 2 Episode One and Portal. These games have been optimized specifically for the Tegra K1 chip and they run quite well having played them myself.

Nvidia has also unexpectedly decided to launch the first European server for GRID today as well, which originally wasn't due to go live until next month. The two US based servers are also live meaning those in Europe and the US should be able to get a fairly decent connection to the GRID depending on individual connection speeds. You'll have to update the Shield Hub app in the Playstore following the Lollipop update to start testing out the new service.

KitGuru Says: We shall be testing out Nvidia's GRID service along with the Shield tablet over the next few weeks so keep an eye out for a review soon. Do any of you guys own a Shield tablet? Have you updated to Lollipop yet? Let us know what you think so far.