Amazon on Wednesday unveiled its long-awaited smartphone. The device is called Fire and it comes with free cloud storage for photos, an auto stereoscopic 3D screen, the Dynamic Perspective software that allows to control the smartphone without touching it as well as the Firefly application that recognizes everything the owner sees or hears and allows to buy it if possible.

The hardware specifications of Amazon’s first smartphone are exactly as expected. The handset is based on the quad-core Qualcomm Snapdragon 800 application processor with 2.20GHz clock-rate and Adreno 330 graphics engine as well as Amazon’s Fire OS 3.5 operating system (a significantly redesigned Google Android). The device comes with a 4.7” auto stereoscopic 3D display with 1280*720 resolution, 2GB of LPDDR3 memory, 32GB or 64GB NAND flash storage, Wi-Fi 802.11ac (with Miracast support), Bluetooth 4.0 LE, NFC, global 3G/4G connectivity, GPS/GLONASS/A-GPS, gyroscope, accelerometer, magnetometer, barometer, proximity sensor, ambient light sensor as well as stereo speakers with Dolby Digital Plus. The device weighs 5.64 ounces (160 grams). The Fire smartphone is made of aluminium, but has a rubber frame in order to make it more comfortable to hold.

The smartphone is equipped with a custom-tuned 13MP rear-facing camera with backside illumination, LED flash, 5-element f/2.0 lens, optical image stabilization (OIS), and high dynamic range (HDR) capabilities. The Fire smartphone includes a 2.1MP front-facing camera. The handset also features four ultra-low power specialized cameras, four infrared LEDs built into the front face of Fire, a dedicated custom processor and advanced real-time computer vision algorithms to track what the owner of the smartphone is looking at (on the screen) and either control the device or adjust the image/stereo 3D image automatically. 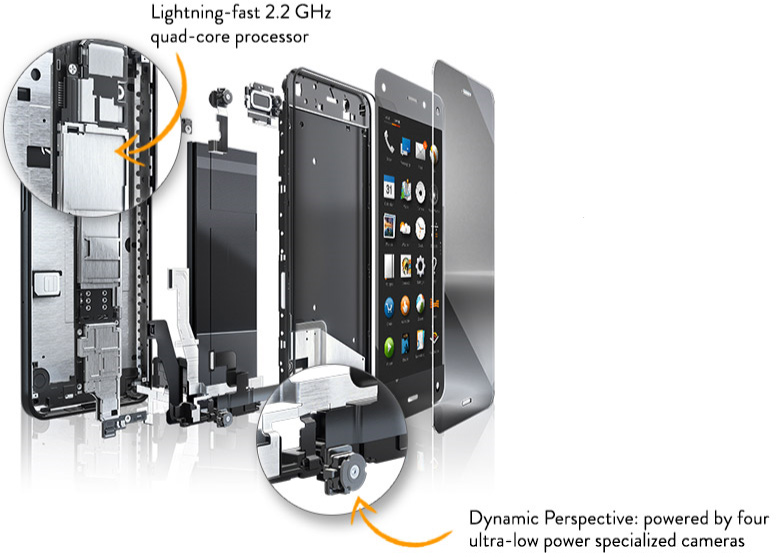 The Amazon Fire smartphone supports all technologies and content services from Amazon, including huge library of books, music and movies, a dedicated app store, Amazon Prime service and so on. Basically, the Amazon Fire offers everything available from Amazon Kindle Fire tablets. However, there are two exclusive technologies, which will be supported solely by the Fire handset:

The Amazon Fire will ship on the 25th of July and will be available exclusively on AT&T in the U.S. The Fire with 32GB is available for $199 with a two-year contract, or for free for $27.09 a month from AT&T on Next 18. Fire is also available with 64GB for $299 with a two-year contract or starting at $31.25/month from AT&T on Next 18. The smartphone will also be available directly from Amazon for $649 for the 32GB version and for $749 in case of the 64GB model. It is unclear when the product is set to be available in the U.K. and Europe. 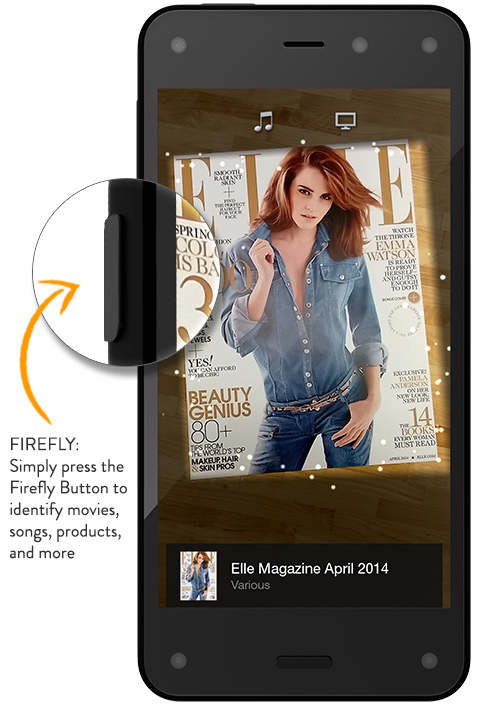 Customers can take advantage of an introductory, limited time offer – buy the Amazon Fire and get 12 months of Amazon Prime (free two-day shipping, unlimited streaming of movies and TV shows with Prime instant video, unlimited, ad-free streaming and downloading of over a million songs and hundreds of playlists, and over 500,000 books to borrow from the Kindle libabry). Existing Prime members get an additional 12 months added to their account.

KitGuru Says: The new Fire smartphone from Amazon not only completes the company’s mobile/multimedia platform, but brings a new set of tools that will allow Amazon’s customers to easier get products and services from Amazon. For example, it is now possible to go to a store, choose an item that suits you best, simply show it to the Fire smartphone and buy it cheaper from Amazon right away thanks to the Firefly. It is also easy to discover movies, music tracks and other things using the technology. In general, the Fire smartphone is an ultimate business tool for Amazon.