Smartphones with 4K screens incoming, 23 million to ship in 2015

The ultra-high-definition resolutions is incoming not only to televisions and PC monitors, but also to mobile devices. Next year the first smartphones with displays featuring 3840*2160 resolution will hit them market, according to analysts from NPD DisplaySearch. Obviously, such handsets will be rather rare, but even in this case their shipments will reach tens of millions of units.

Sales of smartphones with 4K displays are forecast to reach 23 million units in 2015. UHD displays will account for more than 5% of smartphone shipments in North America and Japan in 2015, and just under 5% in Western Europe. 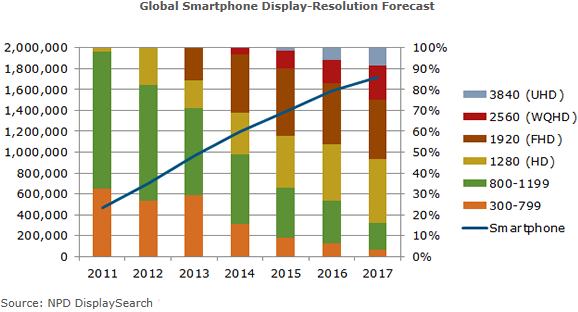 At present, AUO, JDI, Samsung, and other display-panel manufacturers already have 2K displays in production. Developers of applications processor have been shipping products capable of supporting resolutions beyond full-HD (Nvidia Tegra 4, Qualcomm Snapdragon 800, etc.) for quite some time now.

KitGuru Says: While some very high-end smartphones for video and multimedia fans will benefit from UHD displays already next year, it will take some time before such resolutions can be viable on more mainstream handsets. UHD content requires tremendous amount of storage space, a lot of processing power and high network speeds. Therefore, smartphones with 4K screens should not only feature powerful system-on-chips, a lot of built-in NAND flash, but also 4G/LTE Advanced with carrier aggregation, which requires support from network operators.