Although Thunderbolt interconnection technology is not an industry standard that is broadly adopted by all players on the market, it is an interconnection of choice for many creative professionals who work with large amounts of data. Thus, it is not surprising that Thunderbolt is evolving and becomes faster over time. Based on unofficial information, Intel Corp. will introduce third iteration of Thunderbolt with 40Gb/s bandwidth in late-2015 or early-2016.

Intel is reportedly working on the code-named Alpine Ridge controller for Thunderbolt bus that will increase maximum bandwidth to whopping 40Gb/s per single cable. The Thunderbolt 3.0 will rely on PCI Express 3.0 technology and will be able to charge devices and support two ultra-high-definition displays (4K, 3840*2160 and similar resolutions) by one cable, according to a slide published by Chinese version of VR-Zone web-site. In addition, the Thunderbolt 3.0 will support not only TB and DisplayPort 1.2 modes, but also USB 3.0 and HDMI modes (e.g., it will be possible to connect large TVs using Thunderbolt 3 and integrate USB hubs into TB-connected devices).

Since the next-generation Thunderbolt will bring so lot of innovations, it will use a different connector, so owners of current-gen TB-based devices will have to buy adapters to use them with new personal computers. The new Thunderbolt connector will be just 3mm tall and will thus be more suitable for modern laptops. 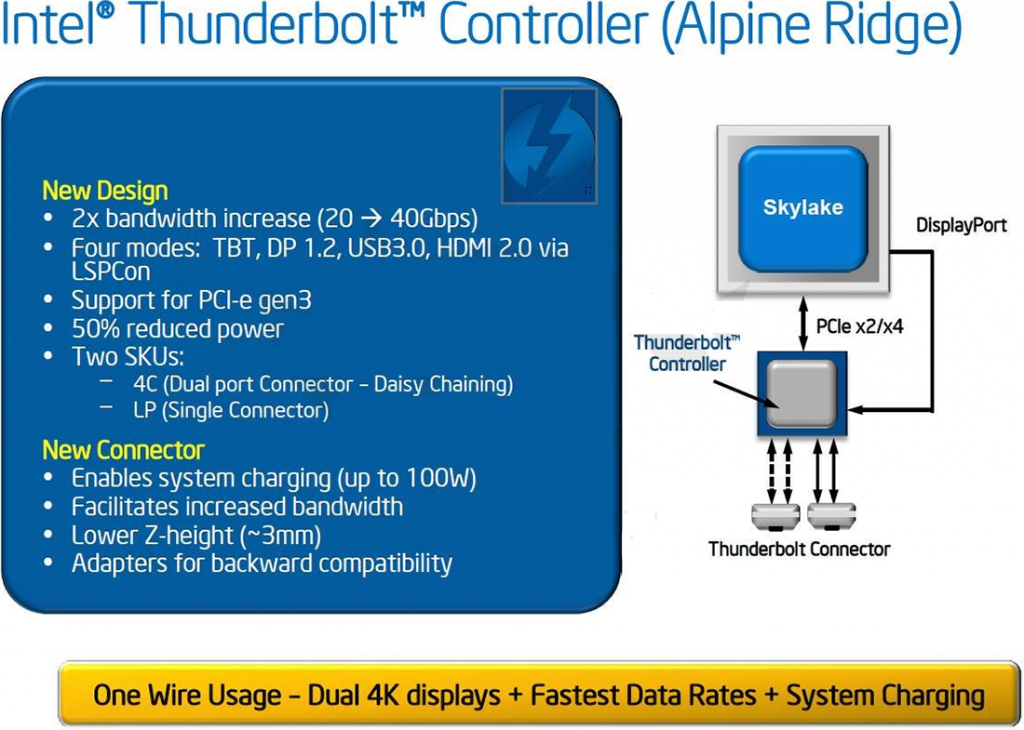 The next-gen Thunderbolt interconnection technology will be designed primarily for Intel’s future-generation desktop and mobile PC platforms based on the code-named Skylake microprocessors. As a result, do not expect Thunderbolt 3.0 or Alpine Ridge controllers to reach the market earlier than in late-2015 or early-2016.

At present it is unknown for sure whether Thunderbolt 3.0 will use optical fibre for data transfers or will continue to rely on copper. Theoretically, Intel could continue using copper cables for short-range connections and rely on optical cables for long-range connections.

The Alpine Ridge controller will exist in multiple versions: one version will provide only a single Thunderbolt 3.0 port, another will support dual-port connector.

KitGuru Says: It is noteworthy that Intel and its partner Apple for some reason avoid integration of Thunderbolt support into chipsets and thus do not allow the technology to really become popular on the mainstream market and thus get more affordable. Each additional chip that costs PC markers $10 – $20 can transform into $50 – $100 for end-user because of various reasons and thus make certain technologies less appealing. Until Thunderbolt is supported by mainstream PCs, it will continue to be an expensive technology for professionals.